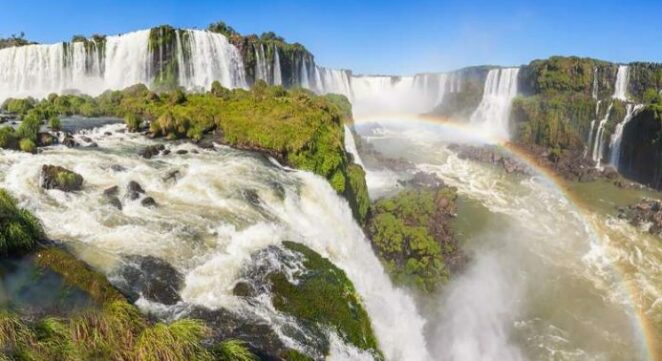 The Iguaçu Falls forms the border between Argentina and Brazil is shaped like an elongated horseshoe; the falls are nearly three times wider than Niagara Falls, at 1.7 miles (2.7 km). Iguaçu National Park, which was 75 years old on 10 January, is the second most visited park in Brazil1 and has an estimated annual economic and ecological value of over $300m. According to a study by the Institute for Applied Economic Research (Ipea, acronym in Portuguese)2, tourism in the national park generates over $37m a year for the local economy and neighboring municipalities raise $4.28m a year in ecological value-added tax Using a method that estimates the economic value of environmental services per acre of preserved Atlantic Forest, the current value of the environmental services provided by this protected area, such as clean water supply, nutrient cycling, soil protection, and restoration, erosion control and climate regulation is estimated at over $258m a year3. Iguaçu National Park, therefore, has an estimated annual value of over $300m and is a permanent source4 of natural resources and economic income.