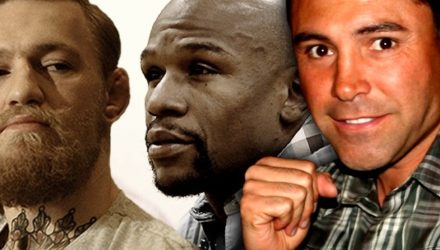 The same man that trashed Floyd Mayweather vs Conor McGregor calling it a circus that could literally ruin the sport of boxing just said that he knows that he can take out Conor McGregor in two rounds via an interview on Golden Boy Radio. He also went on to say that, he ‘d come back for that fight, calling Conor McGregor out by saying “Two rounds, that is all I need. That is all I am going to say.”

De La Hoya vs McGregor would be interesting! As far as the build-up, because both are from different countries, with Oscar De La Hoya being from Mexico, and Conor McGregor being from Ireland, and both would draw fans not only from the United States, but from their countries as well, plus both are from different sports, and would draw fans from their perspective sports. However, as much as I would love to see it, I mean come on! The man wrote an open letter to fans trying to derail their interest in the Floyd Mayweather vs Conor McGregor fight, with a claim of protecting the sport of boxing.