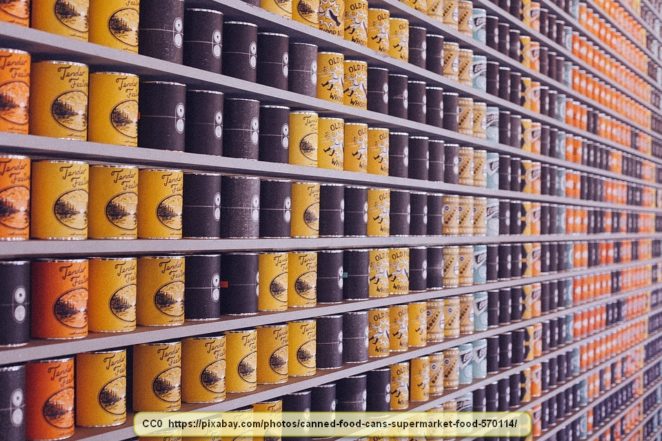 A common feature of grocery stores today is row upon row and shelf upon shelf of tin cans containing food. Actually, they aren’t made of tin, but they are metal cans regardless of what you call them. They come in various sizes and most have labels to identify the contents, but even a small store can contain thousands of cans of food. Have you ever thought about the interesting history of the container; the can?

When people put up food at home today, they normally use jars with a lid and ring, sealed so the food won’t perish. The problem with this is that glass breaks easily. In 1810, Peter Durand, a British merchant, figured out a better way. He patented the tin can; a container that could seal food without having a tendency of breaking.

The biggest problem for most businesses was that at that point, only six cans could be manufactured per hour. It wasn’t until 1846 that Henry Evans invented a machine that could turn out 60 cans per hour.

There was another slight problem that many people and food businesses overlooked. The only way to open the cans was by using a hammer and chisel. That was neither easy nor was it particularly sanitary, though people knew little about sanitation at the time. Still, it wasn’t easy to open the cans, which were in use by the time of the Civil War.

Finally, in 1858, nearly a half-century after metal cans were invented, Ezra Warner, an American, invented the can opener.

Today, far more than 60 cans per hour are created and we have an assortment of can openers, from manual to electric. Some are even pop-top so a can opener isn’t even needed. However, for 48 years, people were needing to open cans of food with a hammer and chisel.