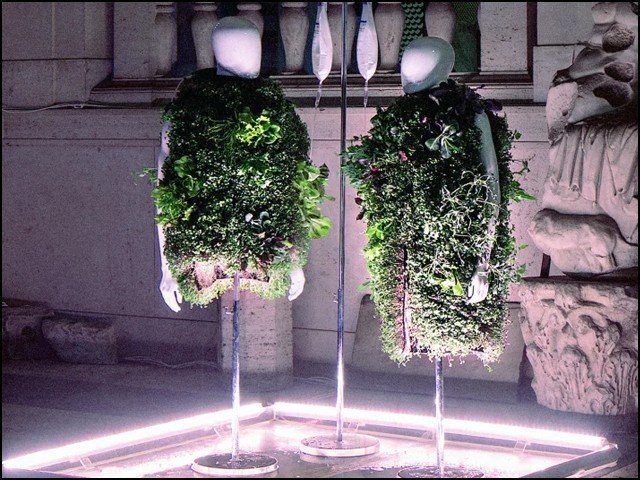 A French-American designer, Erosiak Gabrielian, has created a unique dress that actually consists of small vegetable and small fruit plants. This dress is called “Post Human Habitat” and created by impressing with the vertical fields of the French plant specialist Patrick Blanc, In which the soil is not used at all. Similarly in this vegetable and fruit garment, all plants are grown on cloth.

This is why it takes at least 15 days and at most a month to prepare this dress. because first, the seeds of the particular plants are sown in its thick cloth, and it need two weeks to a month to grow significantly.

It is not known who has bought and used the dress so far but it has been found out that whoever wears this garment, Its urine (after passing it through forward osmosis) will be used to irrigate these plants.

According to Gabrielian, this is not the garment but the world’s first “wearable garden.” So far he have grown 22 vegetables and fruits, including cabbage, turnips, strawberries and peanuts and when this garment is ready, it has a natural fragrance that creates a pleasant impression not only on the wearer but also on those around it.

All the information is in front of you. Now decide for yourself whether it is called a “Real plant dress” or a “wearable garden”?