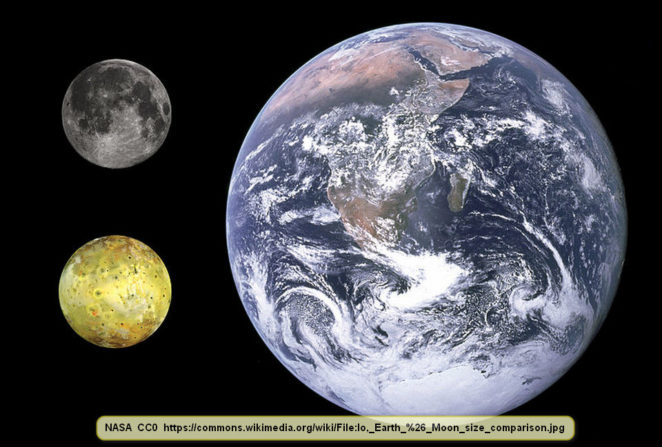 A few days ago, we looked at Jupiter and the hydrogen it is mostly made of. Now let’s look at one of Jupiter’s moons; Io (pronounced eye-oh). It is easily the most active world we know of in our solar system.

In comparison to Jupiter, Io is tiny, but most of that is an illusion. Io is actually a little larger than our own moon, which is about a quarter of the size of the earth. However, Io is a place of constant volcanic activity.

Mercury, Venus, Earth, Mars, and our moon have all had volcanic eruptions and Earth still does. At any given time, 11-13 volcanoes are erupting on Earth. However, there are several dozen volcanoes erupting continuously and violently on Io. The volcanoes there are also of a different sort than what we have on Earth.

On the earth, volcanoes spew out ash and lava; molten rock made mostly of silicon. The volcanoes on Io spew out mostly sulfur and sulfur dioxide. Under the surface of Io, there are vast ‘magma chambers’ filled with hot, liquid sulfur and silicon and this is what is vented when an eruption takes place. Io has a thinner atmosphere than the earth and the gravity is much less, so the eruptions send out the liquid sulfur to heights of many miles above the surface of the moon.

In fact, the eruptions occur with such force that some of the sulfur escapes the moon entirely and forms sort of a thin cloud around Jupiter, along its orbit.

The mechanism that causes volcanoes on Earth is earth’s internal heat. The earth still hasn’t entirely cooled down since it was created. The mantle of our planet is made up of very hot, elastic, melted rock. As it reaches the surface, the lower air pressure allows the lava and ash to explode outward.

On Io, though, the heat that is generated comes from Io’s location. It is continuously stretched by the gravitational pull of Jupiter and two of the other large inner moons of Jupiter. The ‘tug-of-war’ stretches Io back and forth, generating enormous heat. In fact, the gravitation causes the surface of Io to be pulled up in land waves of as much as 300 feet; about the length of an American football field. The land waves are similar to the ocean tides we experience on the earth, due to the pull of the sun and the moon, except that on Io, it isn’t seawater that forms the waves, it is solid rock.

The amount of heat that this causes is great enough to not only keep the sulfur liquid, but it also causes ‘lava lakes’ on the surface of Io. All of this leads to the fact that Io is the most volcanically active world we know of in the solar system.

The picture, put together by NASA, shows a size comparison between the earth, the moon, and Io.