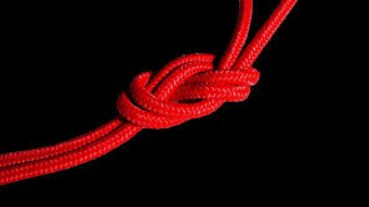 Rahab knew that Jericho’s king intended to harm the spies, and found a perfect hiding place for them. “She had brought them up to the roof of the house, (the mind) and hid them with the stalks of flax, which she had laid in order upon the roof” (Joshua 2:6). Flax was a plant. The finer parts of the plant were used for making a soft cloth, called linen. The coarser parts of the plant were used to make twine, the twine was then braided together into rope.

Rahab, like many in her day, had a little side business on the roof of dying cord and cloth. Rahab’s specialty was red, (color of Lamb’s blood, the truth) just as Lydia was a seller of purple, (wealth, luxury, vanity, lies) (Acts 16:14). The soldiers went out to search for the spies but the gates were locked (Joshua 2:7). It seemed as if there was no escape for Joshua’s spies because Canaanites were swarming the city and entire countryside searching for them.

The two Israelite spies had to entrust their deliverance to a common pagan prostitute who believed in their God. He often uses humble instruments to do great things. Was Rahab Dishonest? We all wonder how God could actually bless Rahab-after all, she had lied, and, as we all know, lying is always a sin. The Bible’s record, however, is the whole truth and even records the failings of God’s people.

Can you remember when David pretended to be crazy to escape from Achish the king of Gath (1 Samuel 21:12-15)? And, how about when David’s wife Michal told Saul, her father, that David was sick in bed and then let him out through the window to save his life (1 Samuel 19:12-17)? Yes, she was indeed dishonest and might not have known any better at that early stage in her God-fearing life. Her actions, however, came from sincere faith in Him, and He looked on the sincerity in her heart.

Is Rahab, God’s Church? In the Bible A woman,in the Bible always represents a church, Rahab is the symbol of God’s church. Were there ever times in God’s church’s history where she has been unfaithful? “And the Lord said to Hosea, Go, take unto thee a wife of whoredoms and children of whoredoms: for the land hath committed great whoredom, departing from the Lord” (Hosea 1:2). I wonder,

if Rahab and her red rope, (the truth) is still visible today or is Lydia’s purple rope, (vanity, riches, pride) the only rope visible and available today?