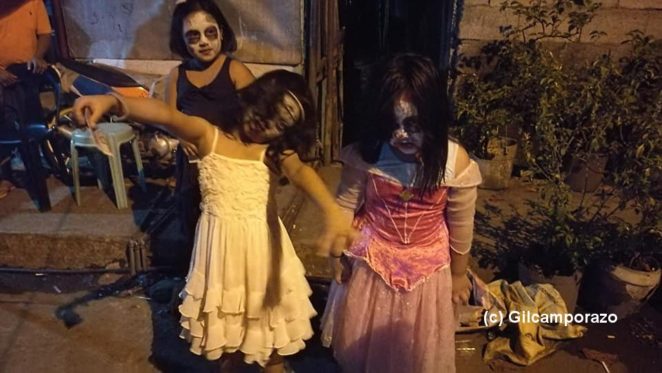 We belong to Asian countries and Halloween is not practically celebrated or held. However, particularly in our country Philippines, some of the people are observing that, for they believe that this is influenced by Christianity. Thus, All Saint’s Day is nationally observed by the Filipinos, the Catholics so to speak.

I don’t know where this practice or custom originated. As far as I know it is well advertised in the TV and the Americans are having this kind of party. Since it has spread or influenced our culture due to Christian influence of celebrating All Saint’s Day, kids and adults are putting make-up for themselves to look them scary. The scarier they are, they love it and feel happy about it.

This is the first time that our grandchildren let themselves make up by their aunt. They want to look scary. They want to scare passers by. You know what had happened. The passers by were amused, entertained of their scary look and in return they were given candies.

Their parents, and us, their grandparents are happy for them too. Their uncle and aunties are happy as well.

I think we find no problem about that. What about you?