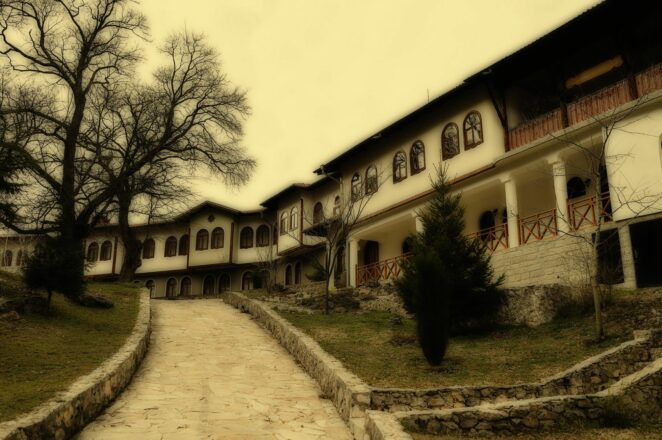 Old houses in the town of Melnik Bulgaria turned into a hotel. I will publish information about the smallest town in my country with about 250 inhabitants. It is located in the southwestern part of the country, near the Greek border, and is surrounded by the ridges of Pirin and Belasitsa.

The town is surrounded by a valley of magnificent and impressive earth pyramids. It was declared a cultural and historical reserve and a city-museum.

Exposed architectural details, coins and more. they say that there was a settlement here during the Thracian era. The area is inhabited by the Thracian tribe Meldi, who gave the world the great leader of the Roman slaves Spartacus. In the 6th and 6th centuries Slavs settled along the river Struma and they gave the name Melnik to the settlement. In the middle of the 9th century, during the time of Khan Presian, the city joined the Bulgarian state and gained important strategic importance.

The great rise Melnik experienced when despot Alexi Slav, a descendant of the Bulgarian royal dynasty, made the city the capital of an independent feudal principality. A number of churches and monasteries were built, boiling in trade, cotton and tobacco production. The magnificent Melnik wine, obtained from a special variety of vineyards brought all the way from Syria, has made the city famous all over the world. After the fall of Ottoman rule, the village gradually declined. During the Bulgarian Revival, Melnik became an important economic and spiritual center with over 25,000 inhabitants, about 1,300 houses and more than 70 churches.

The old mill houses impress with their rich architecture and unique cellars.

Today, this beautiful city is one of the most attractive places for tourists from home and abroad.