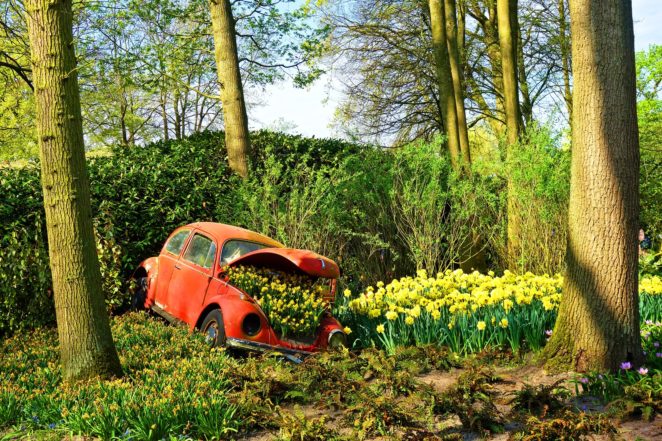 In a shady glade in an old abandoned homestead, somewhere in Connecticut my friend a trucker was taking a construction bypass leading down the main road of a deserted town. Shady-glen the sign said. He was suddenly filled with melancholy and a deep desire to take the turnoff to Shady-Glen. His 18 wheeler Mac compressor, Jostling and bouncing down the overgrown dirt road, he ended up at the rusty old gate to the Shady-Glen property.

A glance at the hole in the wall where a door once was and the entire edge to edge view of the nearby hill, seen from the gaping view of where a wall had been, too long ago instantly revealed that no one could possibly be living there. At the edge of the property between a clump of trees was this faded red Volkswagen Beetle doubling as a crowded daffodil flowerbox.