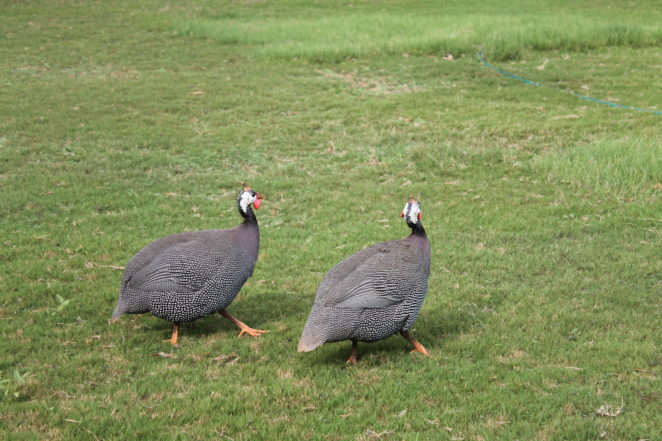 It was a nice change to see a pair of guinea fowls in a park. I have not had guinea fowls before, but a cousin of mine raised them, he was fed up after a while as they would lay their eggs wherever they wanted, high up in the trees, in the compost pile or in some unreachable spot.

I found their meat kind of tough and not as tasty as chicken. These were not friendly birds either. They didn’t like much human contact, at least the ones my cousin had didn’t. They didn’t need a coop as they roosted on trees and the best part was there were no snakes as long as the birds were around. (Yeah he lived in a snake infested place.)

I loved their neatly spotted feathers and had a huge collection of them as a child. I traded them with friends for peacock, parrot, eagle or other bird feathers. I had a huge box full of feathers that I had to throw out when I left home to go to college.

Seeing these birds strolling in the park as if the place belonged to them brought back all these memories for me.