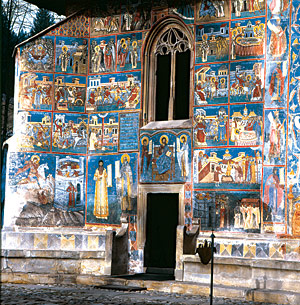 Voroneţ Monastery is the clear example of Moldavian Christian architecture. One of the most beautiful monasteries in Northern Moldavia, Voroneţ surprises not only through architecture but also through the extraordinary painting that made it famous all over the world. The unique blue on its walls has become a subject of story and historians consider it to be the most important foundation of Stephen the Great. 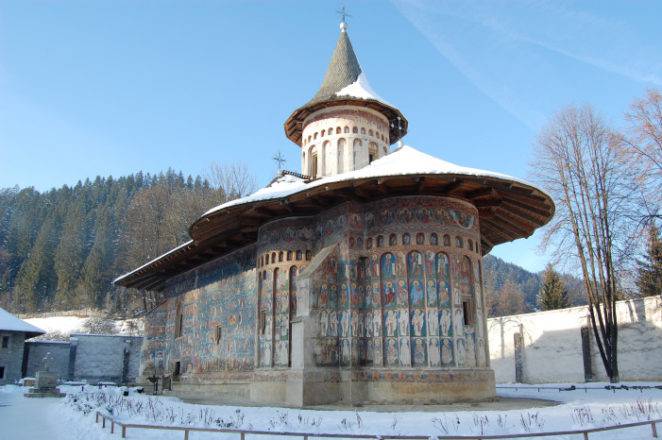 Built in 1488, the Voroneţ Monastery was built in a record time: 4 and a half months and the site chosen for the foundation was that of an old wooden-built sketch. Here the legend, faith and reality united in an unusual way, for the first priest and abbot of the church was none other than Daniil Sihastrul, a real-life character. Besides, it is buried in the monastery itself and its cross is watched by a never-ending lamp. For from her she hath gathered light for all the service.

Renowned all over the world, the blue hue that bears the walls of the monastery took its name, becoming Blue Voronet. It is the most resistant color and has faced incredibly well the centuries that have passed over it, the weather and the few renovations here.

Even though the color recipe is no longer known to anyone, the technique used is well-known. The craftsmen started working on painting when the walls of the church had not yet dried out, choosing the exact moment when the paints would be best fused with the plaster.

Every day work starts at the top of the house and then continues down. Things were designed in such a way that the painting was as harmonious as possible and the differences between the styles of the craftsmen working in parallel were minimal. That is why each biblical scene was separated from each other by color lines. First, the contours of the scenes and the characters were drawn, and then the drawings were completed with the colors chosen in advance. Moreover, although it seems surprising, the last color on the walls was not blue or any other dark shade, but a pure, immaculate white that was meant to accentuate certain details.

It is certain that although other monasteries in Northern Moldavia benefited from this gorgeous blue, he is really alive only in Voroneţ, for here the craftsmen knew how to apply it to the wall at a certain degree of humidity, which made him to keep absolutely perfect.

Voroneţ Monastery is called the “Sistine Chapel of the East”. It is a medieval monastic complex built in the village of Voroneţ, today the district of Gura Humorului. The monastery is 36 km away from Suceava and 4 km from the center of Gura Humorului. It is one of the most valuable foundations of Stephen the Great (1457-1504), the great voivode, ruler of Moldavia.

The interior painting of Voroneţ is made during the time of Stephen the Great, having as a model the Byzantine iconography and the seal of the Stefani artistic age (sober, concentrated, magnificent style, essentially reducing images and expressions). Among these interior paintings are especially attention to the Last Supper, the Apostles’ Communion, the Washing of the Feet (in the altar), the Passion Cycle, and the votive painting of Prince Stefan cel Mare (in the nave).