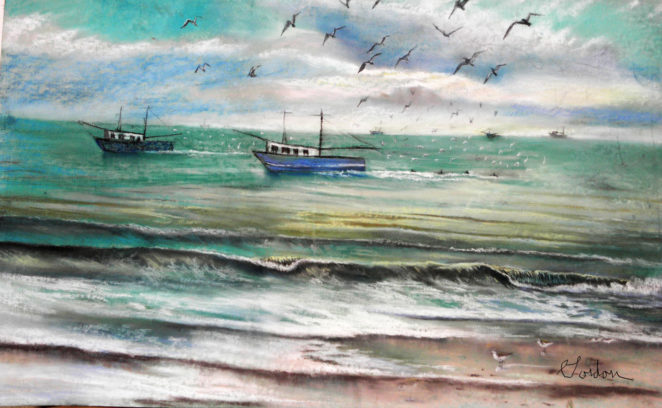 These days five hours doesn’t seem like much of a ride but back when I created this pastel it was. I remember getting laid off for the summer, it was a seasonal job at a publishing company, it was the summer of 93.

I had fought for several years to make a seasonal job a permanent position. This time though all the people who were  beneath me in seniority had either quit or gone to another department. The lay off came with quite a surprise and yet it was probably timely in retrospect.

I believe it was the first family vacation to Galveston, a summer trip that has since turned into a Florida trip every year. I remember the early morning as the haze was just burning off the morning and the colors were just beginning to grow richer with a rising sun.

At a certain point in the morning the sun burns out the sky for a bit and everything is flat but this day morning clouds made the early afternoon cool and mild. It was the beginning of a new day for me, I knew I would need to find another job but for now I was enjoying a morning in Galveston.

The shrimp boats had just started coming out and the gulls were finishing up morning patrols. This pastel is really just a sketch of a painting that never actually happened. It was going to be called dawn patrol.

I may just revisit it one of these days soon as it caught that feeling of morning looking out across a beach, a day of possibilities. I was young and hopeful and just as these days, the most amazing things come from being open for new opportunities. I am excited to introduce the dawn patrol from Galveston Texas, 1993.