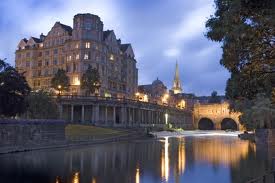 Bath is not only the most beautiful city I know but also one of the most relaxed and cultured. Located in the heart of the county of Somerset, on the river Avon in South-West England, it is a very ancient town, the original spa settlement dating back to Roman times.  Known  then as Aquae Sulis, the hot ancient springs there had healing properties, which is why the Romans built baths there which are still in existence today, and are one of the major tourist attractions.

Much later in history, in the Georgian era, it again became very popular as a spa town, where  visitors  would go to “take the waters” for their health. Most of the beautiful and elegant Georgian architecture still remains well-preserved today. The buildings were crafted out of local Somerset stone, which is a warm honey color, one of the features that makes the city so attractive and distinctive. The great semi-circular sweep of the Royal Crescent is particularly impressive, and  the tiered array of ornate bridges, towers and spires also delight the eye.

As a center of culture and learning Bath boasts two universities, and a variety of theaters, museums, art galleries, and pubs and restaurants to suit every taste and budget. It is situated on the edge of the Cotswold Hills, which are designated an Area of Outstanding Natural Beauty, so there is plenty to do and see, both within the city itself, and in the surrounding countryside.