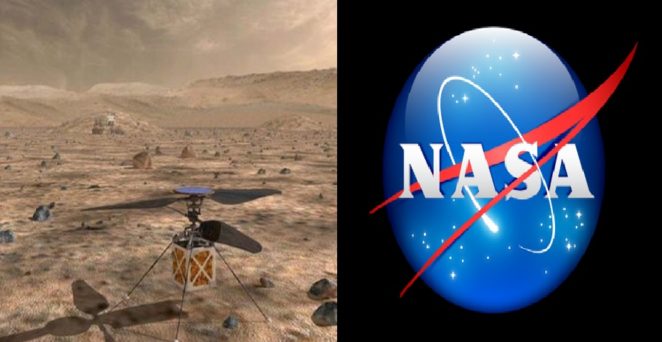 Washington: NASA announces ‘helicopter’ with a space car for its special mission, that will fly like a bird flying on Mars.

NASA’s Space Research Institute completed prepartion for sending drone helicopters to Mars in July 2020. This is small but fast-flying helicopter will take a racket ride on the mission ‘Mars 2020’ with a space car.

This helicopter is designed in this way that it will fly freely on Mars’s land and in the red planet, hidden secrets will be able to inform the world. This mission under process since last 4 years.

NASA told while announcing a helicopter with a space mission in Mars that experience of this wonderful invention will be done in July 2020, which weight is only 4 pounds but its flight will be very faster. This will be the first experience which can be seen flying  a helicopter on the Red Planet whose goal is to track hidden secrets of planet.

Helicopter structure is like a drone, and it looks like a drone, but it also have all the features of a helicopter. Contrary to the ground, it is very lightweight to fly into Mars. So that the helicopter can fly as well as in the air pressure of Mars. In addition, this helicopter is also equipped with such technology which will also save data by observing Mars’s surface structure, environment, archaeological and other risk information.

NASA experts claim, the helicopter’s on Mars will be able to get such information from the flight, those who traveled on the planet can not get the edge which will help to understand the nature of the planet’s  and space world.