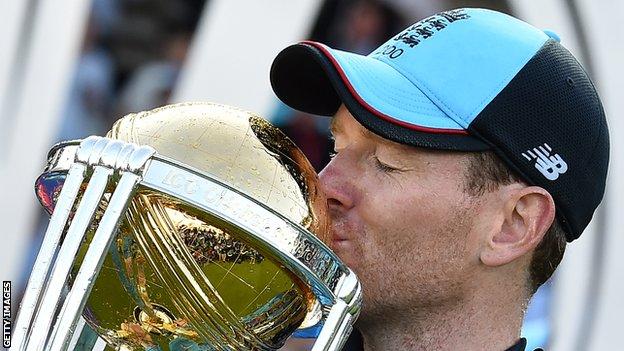 The final of the 50-over cricket World Cup, held on Sunday 14th July 2019, was an amazing match, regarded by most people who take an interest in these things as the most remarkable ever to have taken place.

The final was played between England and New Zealand, neither of whom had won the trophy at previous World Cup tournaments. England were regarded by most observers as the favourites to win, especially given their comprehensive win (by 119 runs) over New Zealand in the group stages only 11 days previously. A repeated easy victory was what many people expected.

However, that was not how things turned out. On a difficult pitch for quick run scoring, New Zealand batted first and battled hard. The first wicket (of Guptill) went down at 29 but the second (Williamson) only fell at 103 in the 23rd over.

The England bowlers all bowled well, with the possible exception of Stokes who was taken off after his three overs yielded 20 runs. Probably the pick of the bowlers was Plunkett, who has a habit of taking key wickets during the middle part of an innings. His three victims – Williamson, Nicholls and Neesham – are all dangerous batsmen who can turn a game. Thanks to Plunkett’s bowling, none of them was able to dominate.

It was thought that a total of 250 would be enough to pose real problems for England, so when the innings closed at 241 for 8 wickets, many people were quietly confident that this should not be too difficult for England to pass.

However, the batsmen who had been the mainstay of England’s previous victories in the group stages did not last long. The top four (Roy, Bairstow, Root and Morgan) were all back in the pavilion with the score on 94.

Hopes now rested on wicketkeeper Buttler and all-rounder Stokes. As long as these two stayed at the crease, reaching the target of 242 always seemed likely, despite the required run-rate growing to beyond eight an over.

Buttler’s dismissal for 59 in the 45th over, with another 46 runs still needed, caused English hearts to sink. It was now going to be up to Stokes to do most of the scoring, with support from the “tail” whose job was to stay put and ensure that Stokes farmed most of the bowling.

However, wickets continued to fall, including a first-ball dismissal for Archer, and it began to look like a hopeless cause.

At least, it would have hopeless but for two remarkable balls in the closing overs, both sixes hit by Stokes. In the 49th over it looked as though Stokes had been caught on the boundary by Boult, but the fielder stepped backwards over the boundary marker, so that counted as six runs.

In the final over England still needed 15 runs to win. The first two balls produced nothing, but Stokes walloped the third ball into the crowd. The fourth ball was only going to allow two runs to be taken, but the second run was very tight. Stokes threw himself full-length to make his ground, but as the fielder threw in the ball it hit Stokes’s bat and rebounded to the boundary, thus adding four to the two already run.

The fifth ball resulted in a single and the running out of Stokes’s partner Rashid when going for the second, so for the final ball two runs were still needed. Once again there was a single and a run-out, meaning that both sides had scored 241!

The cricket equivalent of a penalty shoot-out is the “superover”. Each side must nominate three batsmen and one bowler, the result being decided on who scores more runs in six balls. Should a batsman be dismissed, the third batsman can take his place.

England batted first, with Stokes and Buttler at the crease and Boult bowling for New Zealand. They scored off every ball, including two boundaries, the total being 15.

If the New Zealand batsmen – Guptill and Neesham – could score16 or more off Archer’s bowling, they would win the World Cup. The over started badly for England with Archer bowling a wide, which meant that one run was scored and an extra ball had to be bowled. The third ball was hit for six.

Seven runs were needed with four balls left. Two twos were completed – three runs needed from two balls! A single came off the last-but-one ball. Could Archer hold his nerve and prevent two runs coming off the final ball? The batsmen set off for the second run but a perfect throw from the deep and a clean take from the wicketkeeper meant that Guptill was run out and only one run was scored.

So – both sides had scored 15 in their super-over. However,the rules stated that the side that hit more boundaries – fours and sixes – over the whole match would be the winner if the scores were tied. England had hit 26 boundaries to the 17 of New Zealand. So England therefore won the World Cup by the narrowest of margins!