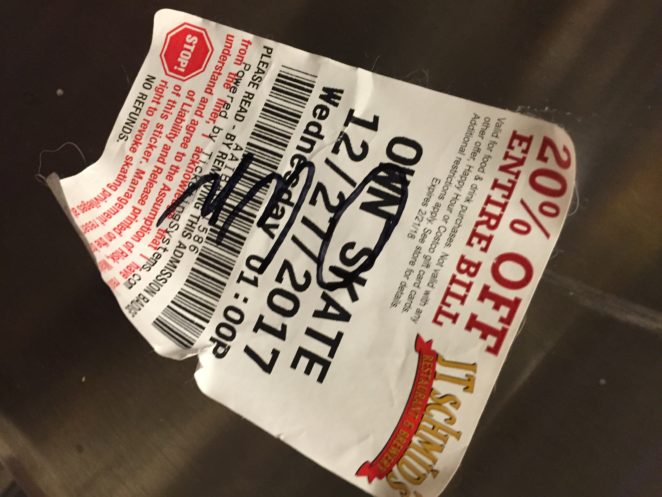 I woke up early in the morning, just to take out the trash and feed Gumby. Then, I went back into my bed and went over my schedule for today. I want to continue watching the Winter Olympics in order to blog about my own Olympics coverage. As I made a cup of hot cocoa, I noticed that time was 10:10 am. I worked on my graphic novel until noon.

For this post, I decided to add one of my ice skating ticket snapshot, which is similar to a ski pass at a mountain skiing resort.

Netherland’s Visser is in first place while Japan’s O. Shigiri is in fifth place. Netherland’s Weijden is in second place, Canada’s Blondin is in third place and Germany’s Pechstein is in sixth place. During the last lap, Czech’s Sablikova moves up to 2nd place and OAR’s Voronina moves up to 3rd place, while Visser remains in first place as she crosses the finish line first. Therefore, Netherland’s Visser wins Gold, Czech’s Sablikova wins Silver, and OAR’s Voronina wins Bronze.

Men’s Large Hill 98M Ski Jump. I think there are also two other level hills at 3.1M and 125M in ski jump race. There are 57 ski jumpers but 50 will move on into the finals. As each man takes his turn, Norway’s Johansson is in first place, Norway’s Forfang is in second place, Japan’s R. Kobayashi is in third place, Germany’s Wellinger is in fourth place, Austria’s Hayboeck is in fifth, Norway’s Tande is in sixth, Poland’s Stoch is in seventh and Germany’s Freitag is in 13th. (This is an interesting coincidence because Freitag in German means Friday and he is in the 13th position. Friday the 13th?).

Switzerland’s Hoefflin falls, but she scored 83.80 in the first run. Norway’s Christiansen is in second place with 89.00. USA’s Voisin is in 9th place with 73.00. France’s Ledeux and USA’s Claire fall. USA’s Stevens scores 64.00. Sweden’s Dahlstroem scores 57.60 but they use her best score from first run of 91.40. USA’s Howell falls. Korea’s Meeyun scores 72.80 in the qualification rounds. Therefore, after the first two runs, the top 12 athletes are Voisin, Killi, Logan, Christiansen, Hoefflin, Dahlstroem, Atkin, Ledeux, Lee Meehyun, Howell, Claire and Gremaud, who will move on to the Finals. The highest scores are from Sweden, Switzerland, and Norway.

USA’s Nathan Chen skates first and receives 296.00, in which he performed six quads and spins. Uzbekistan’s Misha GE received 244.94 because his program was smooth and it flowed nicely. Korea’s Cha Jun Hwan didn’t do well. USA’s Zhou is in second place with 276.00. USA’s Rippon is in 4th place with 259.36. OAR’s Kolyada is in 3rd place. OAR’s Aliev moves into 3rd place with 267.51, pushing back Kolyada to fourth place. China’s Jin Boyang makes it to first place with 297.77, which puts Nathan Chen in second place and USA’s Zhou in third place. Then, Patrick Chen performed, but he didn’t make it in the top three. Japan’s Hanyu scores 317.85, which now puts him in first place. Spain’s Fernandez scores 305.24, which now puts him in second place. Japan’s Shoma Uno scores 306.90, which beats Fernandez’ score, and bumps Fernandez into third place. Nathan Chen is now in 5th place. Therefore, Japan’s Hanyu wins Gold, Japan’s Shoma Uno wins Silver, and Spain’s Fernandez wins Bronze.