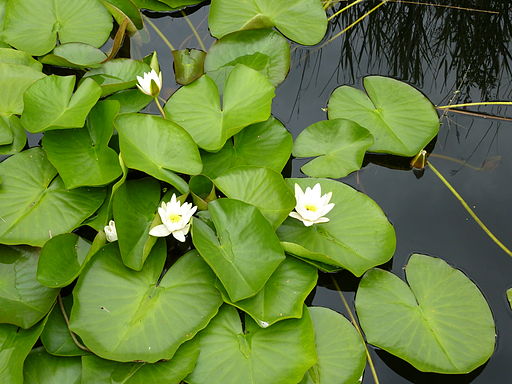 The white water-lily (Nymphaea alba) is a favourite plant for owners of ornamental lakes and large ponds, although it grows wild throughout Great Britain and is native to Europe. It may have been introduced to Britain by the Romans.

Water-lilies are typified by being rooted in the beds of ponds and lakes but exhibiting their leaves and flowers on the surface. In the case of the white water-lily, the fleshy stems can grow as deep as six feet (1.8 metres) below the surface, but the stems on which the leaves and flowers grow can be up to nine feet (2.75) long, which means that the visible parts of the plant can drift away from the point directly above the root.

The leaves are nearly circular, being green above and reddish underneath. The flower is the largest in the British native flora, being up to 12 inches (30 centimetres) across. The whole plant can spread to up to five feet (150 centimetres) in diameter.

The flowers usually have at least 20 petals, often many more, with four sepals beneath that are white inside and green outside. The flowers only open towards the middle of the day and close as evening approaches. The flowers can be seen from June to August.

The white water-lily has been appreciated and admired for centuries, gaining familiar names such as “the lady of the lake” and “swan among the flowers”. It has acquired a symbolic value as an indication of purity and it has also been used for medicinal purposes as it yields an oil that is good for treating skin blemishes and other conditions.