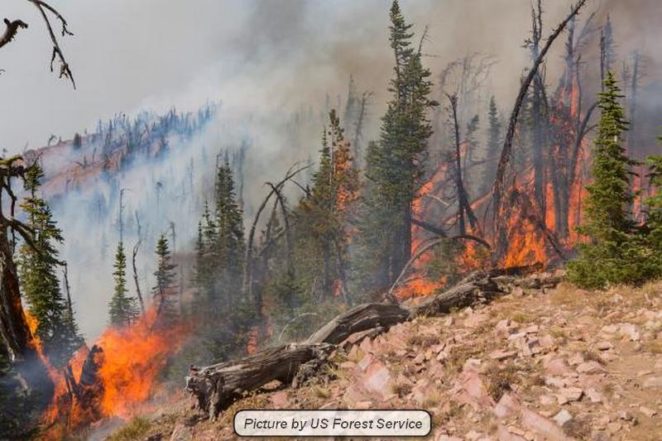 While this old adage isn’t entirely true at all times, it underscores the fact that the air in Montana is filled with smoke. A great deal of media attention focuses, rightly, on natural disasters like hurricanes, tropical storms, tornados, volcanic eruptions, and earthquakes. In the Pacific Northwest, there is another yearly natural disaster that is contended with; wildfire.

When there is an abnormally high amount of moisture early in the year, like there was early in 2017, grasses, underbrush, and forbs (weeds) grow in profusion. Late in the year, when the forests dry out, which is a common annual occurrence, all this material becomes fuel for wildfires. A single spark is all that it takes to ignite a horrendous and devastating conflagration that is hard to imagine without witnessing it.

It needs to be pointed out that wildfire is being classed here as a natural disaster for a reason. While there are a large number of fires every year that are started due to human carelessness and which aren’t completely ‘natural’ disasters because of this, a huge number of the yearly fires start from lightning strikes. If the forest conditions are dry, these fires can expand rapidly and the destruction is devastating.

Currently, in Montana alone, there are in excess of 38 major fires burning. Some of these are contained after only burning 100-200 acres. Many or most of the fires end up far in excess of this.

Fires that burn in excess of 1,000 acres of forest are common. Many burn over 10,000 acres. The biggest fire in the state at the time this article is being written covers over 270,000 acres.

As already mentioned, this is from 38 fires and it doesn’t include fires that the forest service has nothing to do with. The fires are scattered all over the state and the majority are lightning-caused.

Thankfully, most of that land is wildland, so homes and structures that are threatened are minimal, although many areas are under evacuation orders. Unfortunately, the forests that are burning are home to thousands of wild animals. It also takes many years for the trees and underbrush to grow back, even with help from people. In many cases, the trees that are burning are fully mature pines, firs, and hemlocks. It takes a bit more than a half-century for a pine tree to reach maturity, so the devastation is felt for a long time.

The men and women who fight the fire are also at grave risk and they work incredibly hard to contain and control the wildfires. They deserve recognition, though that isn’t the reason they are doing the dangerous work.

The firefighters also come from all walks of life. Some are employees of the US Forest Service, state forestry, Bureau of Land Management, or are members of local Native American tribes. However, about a week ago, the National Guard in Montana was mobilized to fight fire, too. Many local citizens get involved in actively fighting wildfires or in support capacities. There are even a large number of private companies that supply resources and equipment. Several of the helicopters shown in these images are owned and piloted by private businesses.

People rarely hear about the tremendous work and effort that goes into combatting this natural disaster. Right now, there are blazes burning throughout the Pacific Northwest and in Canada. There are fires in many other states as well.

It is appropriate to take a moment or two to acknowledge everyone who is involved in fire suppression efforts and to say a prayer for the safety of the people who are actually battling the blazes.

The valleys in Montana are clogged with smoke. The reason is that there really is fire in virtually any compass direction you can point. The fires are a means for nature to renew itself, but in the process, there is enormous lost.