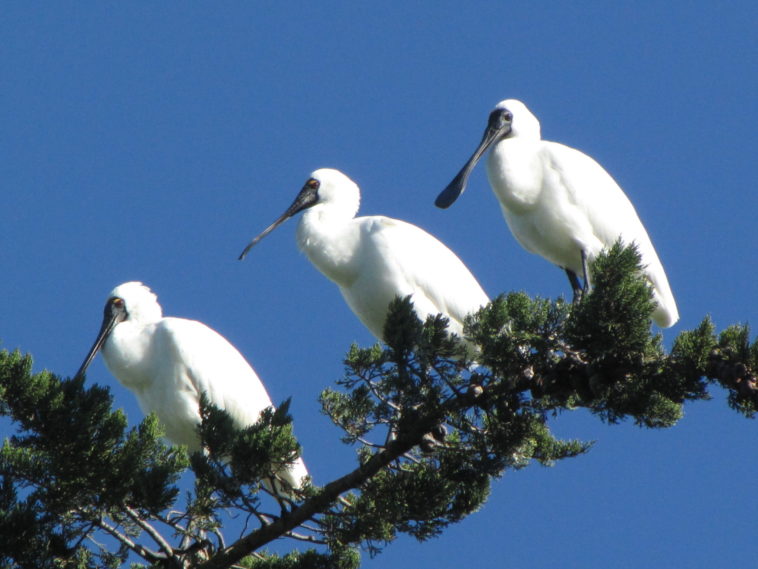 I first saw the New Zealand Royal Spoonbill in Weymouth in some macrocarpa trees over looking a beach going to the Manukau harbour. My sister told me about them as they were some birds she saw in the Miranda Bird Sanctuary in the Hauraki Plains. I wanted to see them and didn’t  expect to find them at Weymouth.

So I took lots of photos of them on my first sighting and one went into gallery eight of the New Zealand Herald. I call it “The Three Wise Men” This is it.

Now I’ve been back several times and taken more photos. The last time was two days ago at the same place.

They look like some characters that would appear in “Dr Suess” cartoon books. I love Dr Suess.

They breed in New Zealand and Australia, some go off to nearby countries. They look awkward but are very good fliers.

The Royal Spoonbills don’t like loud noise in their breeding patch so one woman was not very happy to see a gang of motor bike riders with their boom box one year. I hope they will tone it down.

That’s two flying at once, I often wonder if birds like this fly for the love of the ride or else are they trying to win a mate by moving about and flexing they muscles?

Their appearance is described as a large, bulky, long legged waterbird with white plumage and black- spoon shaped bill, facial skin and feet.During the breeding season adults grow white distinctive white crests on the back of the head or nape, up to 20 cm in length. The Crest is raised during mating displays revealing pink skin underneath. The bill is 136-220 mm long, the wingspan circa 120 cm. Breeding birds have a creamy-yellow breast, a yellow patch above each eye, and a red patch in the middle of the forehead in front of the crest feathers. Females are slightly smaller than males, with shorter legs and bill.Outside the breeding season the crest feathers are  smaller and the rest of the plumage appears soiled.

I yet need to see the Royal Spoonbill at breeding season to get their photos. I look forward to that chance!

Bottoms up to land!

It was windy and cold that day, and I have a Canon SX50HS digital camera with a Zoom of 50X IS

On taking photos the birds are very high up in the trees and two days ago, only in one tree which they shared with  New Zealand White faced Grey Herons.

I have often seen the Royal Spoonbills in the mud flats of the Manukau Harbour and it appears in seeking prey that these birds are actually using their Spoon Bill as a vacuum cleaner, moving their beak from side to side with their bottoms up and their bill extending from their long legs. It would be a great vacuum cleaner I think if birds could be house trained?

This particular Spoonbill in the water is one such bird seeking prey. This photo was taken by Puketutu Island in the lagoon, its by Mangere Sewage plant but the water extracted has been cleaned.

This could be one Royal Spoonbill in it’s breeding plumage, I have yet to get a better look.

Hopefully will have more with more photos soon.

Now it feeds on small crabs, shrimps, or juvenile fish, even flounder. A flounder fish is flat and is like a sole fish which is found in New Zealand mud flats on the bottom of the water. These birds even eat small insects and frogs.