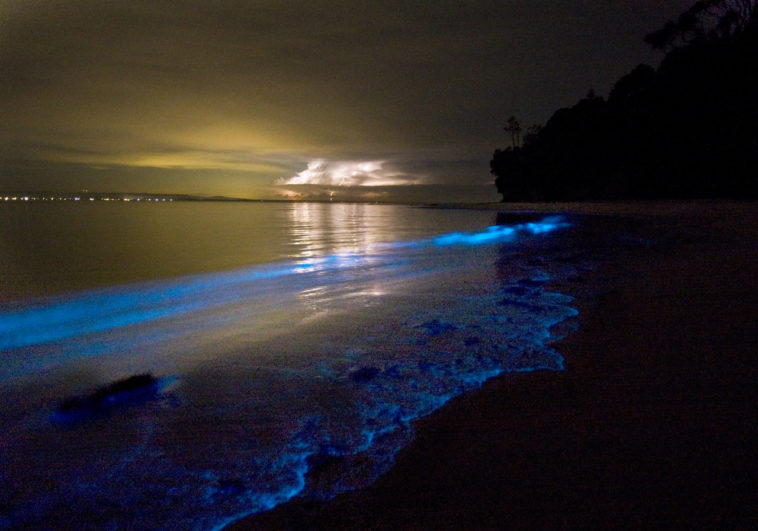 Photo by @BrianSkerry. Firefly Squid glow with electric blue light as they wash up on a moonlit beach in Toyama Bay, Japan. Though the female Firefly Squid dies shortly after spawning, only on those nights when there is a new moon and it is dark do these creatures venture into very shallow water. Caught by surface currents, many of these squid and wash on to the dark, volcanic, sandy beaches of Toyama Bay. The blue light is from photo cells on the squid's tentacles, which glow with luminescence before they die. Photographed on assignment for @NatGeo Magazine. To see more photos of ocean wildlife, follow @BrianSkerry on Instagram. @thephotosociety @natgeocreative #japan #squid #firefly #night #photography #toyama #bay #underwater #natgeo #nationalgeographic #onassignment #photooftheday #conservation

The beach of magic is Toyama Bay, Japan.  This spectacular show attracts many people to this beach. It is known as a spawning ground for the firefly squid, which makes this amazing glow. In these moments, the beach gets neon color. Actually these are their last moments.

These gorgeous creatures, actually known as Glowing Firefly Squids are considered to be the most beautiful creature of marine life on earth.The reason behind glowing a beautiful blue color is its body covered with photophores.  And by glowing light it actually communicates with other Firefly Squids. The light is produced due to a chemical reaction called bioluminescence. It is a reaction in which living organisms produce light. Communication is the main reason for this. It is used to   gather more Squids, to scare off their enemies,attract small fishes around them on which these Firefly Squids feed, or camouflage.

The spawning season of the firefly squid runs from March to May. During this time, the squid can be seen gathering in large numbers in Toyama Bay in Japan. This is the place where they gather by the millions, laying their eggs. Once the eggs have been released into the water and fertilized, the adult squid begin to die. This completes the one-year life cycle of the squid. This annual light show is so spectacular that the area where they gather has been designated as a special natural monument.

They are known for spending the day at depths of several hundred meters,and  returning to the surface when night falls. That’s the time when we get to enjoy the amazing sight.