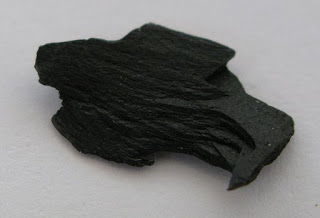 Jet is an organic material that is closely related to coal and is often worked as though it were a mineral.

It is mainly found in strata from the Lower Jurassic era, originating from logs of ancient Araucaria trees (ancestors of the modern ‘monkey puzzle’) that fell and were washed out to sea, eventually being buried under other sediment that, over millions of years of heat and pressure, converted them into a relatively soft form of lignite or coal.

Pieces of jet are often found on beaches in such places as Whitby in North Yorkshire (England), where they have fallen from nearby cliffs as a result of local erosion.The softness of jet allows it to be carved into many different shapes. It can also be polished to a brilliant sheen, which has long made it a popular material for use in jewellery.

Examples of jet jewellery have been found from Bronze Age and Roman times. It underwent a revival in popularity during the late Victorian era when people copied the fashion set by Queen Victoria for ‘mourning jewellery’ after the death of Prince Albert (she never wore anything that wasn’t black for the rest of her life).