Geysers offer spectacular evidence that, in some parts of the world, there are some very hot rocks not far underground.

The word comes the Icelandic for ‘spouter’ or ‘gusher’, and they are a regular feature of the landscape in Iceland, which sits on top of the mid-Atlantic ridge where hot volcanic material is constantly being pushed towards the surface.

A geyser occurs when rainwater percolates down through cracks in the rocks to accumulate in an underground reservoir that is under constant pressure from a heat source such as rising magma. The water is heated to the point where it expands and is forced upwards through a narrow pipe to the surface.

The result is a geyser of hot water and steam that can shoot seventy metres or more into the air.

The reservoir is now ready to receive more water which will also be ejected when it has been heated and forced upwards. As long as the supply of water is constant, the geyser will erupt at predictable intervals.

It is as though one kept a kettle constantly on the boil but with the lid blocked and only a narrow spout. The contents would be forced out violently time after time, provided that water was always being added to the kettle to replace what had been lost. 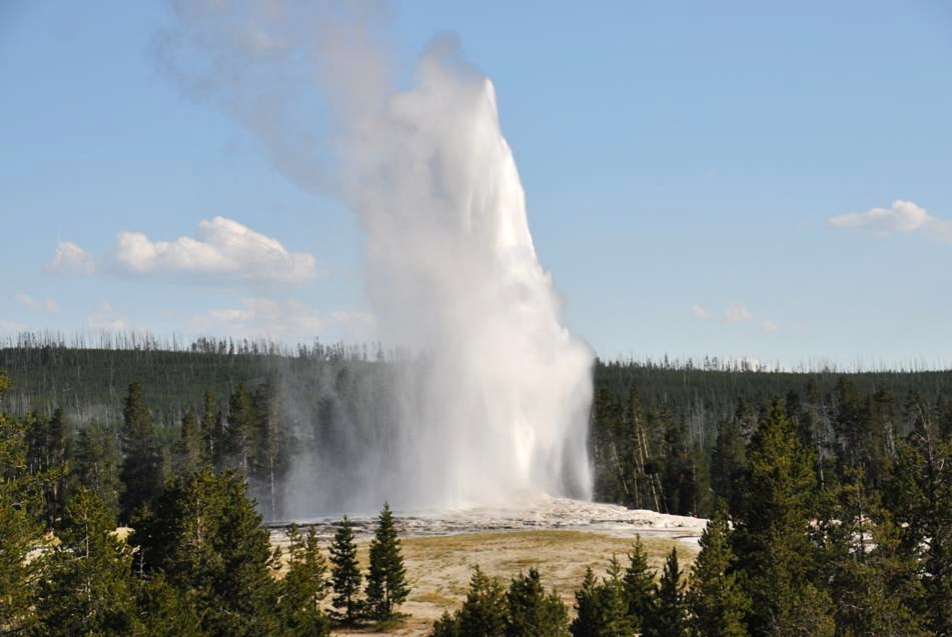 One of the world’s best-known geysers is Old Faithful in Yellowstone National Park, Wyoming, USA. This often erupts at 90-minute intervals, with each eruption lasting up to five minutes. However, if the supply of water is lessened, it will erupt more frequently but for shorter durations. The heat source is the volcanic ‘hot spot’ that underlies a vast area in this part of the United States.

There is evidence that Old Faithful has been erupting for at least 700 years.