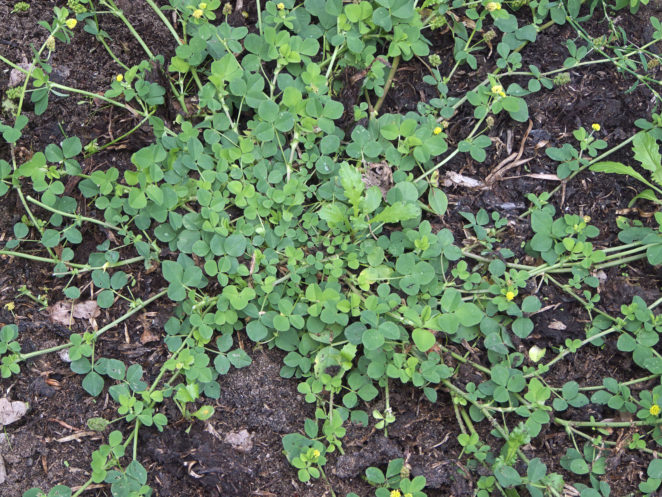 Black medick (Medicago lupulina) is a common wildflower found on grassy roadsides, particularly in southeast England where it grows alongside meadow grasses and cinquefoils.

It is a low-growing plant, reaching 20 inches high at its maximum but often much lower than that. It has rounded leaflets, grouped in threes, that end in a tiny point. It flowers between May and August, the yellow globe-shaped flower head containing up to 50 separate flowers. The petals fall away from the kidney-shaped seedpods which turn black, hence the plant’s name. However, the pods do not release seeds; instead, the seeds germinate inside the pods and force young rootlets through the pod walls.

The “medick” part of the name has nothing to do with any medical uses that the plant may have had in past times. It derives from the Medes, who were an ancient Middle Eastern people noted for their highly developed legal system. The Romans gave the name to lucerne (Medicago sativa), a well-known food crop, and this has spread to related plants down the centuries. Black medick is still cultivated for animal fodder in some parts of Europe.