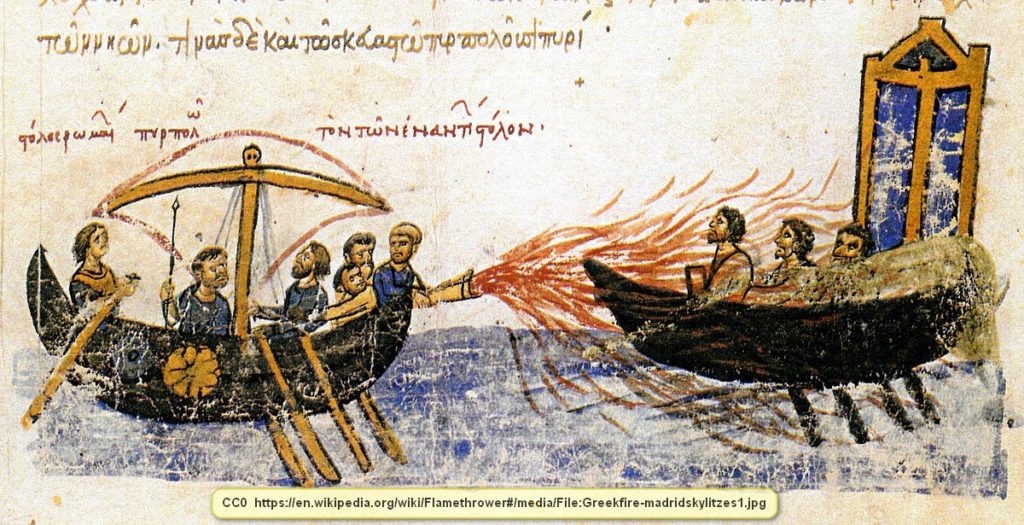 Much of ancient history was recorded, but not all of it was. This was particularly true when something was successfully kept a secret because it gave a group of people a military advantage over others. Such is the case of Greek Fire.

It should first be mentioned that ‘Greek Fire’ is a misnomer. It wasn’t invented by the Greeks. It was invented and used by the Byzantines in the 7th century. Some of the other, less well-known names were sea fire, war fire, and Roman fire. These are at least a little more accurate.

Greek fire was an incendiary weapon the Byzantines used to set enemy warships on fire. What we do know is that it was fluid, it burned on water, and it stuck to whatever it splattered against. We also know that it was incredibly effective. Some historians have even surmised that it was actually set ablaze when it came in contact with water.

There were two common methods of delivering Greek fire to enemy warcraft. The first was through the use of a siphon operated tool that was the forerunner of the modern-day flame thrower. This was aimed at enemy craft and the Greek fire was unleashed. Anything it hit was immediately set on fire,  which was particularly disastrous for a wooden ship and the people on it.

The second method of delivery for Greek fire was the direct ancestor of the modern hand grenade, though, in the hand grenade of today, explosives are used. A flask of sorts was filled with Greek fire and this was then lobbed at the enemy ship. It broke on contact, spewing the liquid contents, which immediately burst into flames. Although the substance used is totally different, this is the idea behind the use of napalm in warfare.

The thing is that although there are a number of theories, we still don’t know what was in Greek fire or how it was made. It has been suggested that Greek fire may have contained sulfur, pine resin, naphtha, calcium phosphate, potassium nitrate, and/or quicklime. All of these were available to the Byzantines and all of these would burn or explode in certain circumstances, but nobody knows for sure. Further, Greek fire wasn’t described as being explosive.

Incendiary devices were in use long before the invention of Greek fire; for instance, flaming arrows. However, Greek fire had many advantages and it was far more destructive. The fact that it would burn on water was also a significant advantage.

Greek fire was used successfully in a number of Byzantine military campaigns, including the protection of Constantinople against two Arab incursions. It is only natural that the Byzantines were deliberately quite tight-lipped in regard to the formula. To this day, we still don’t know what was in it.

Greek fire is a baffling unsolved mystery that may never have a resolution.