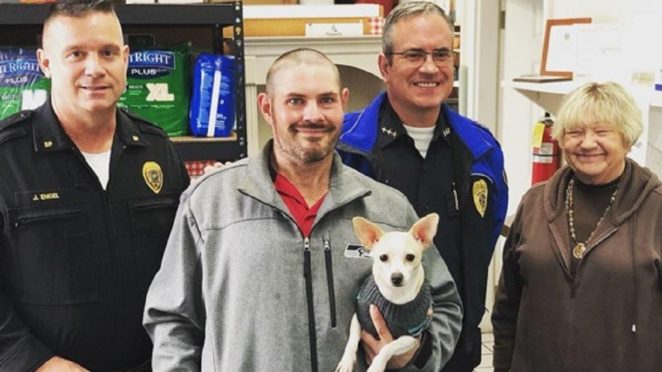 If there is anything that I did not know of homeless people is that I did not know that despite their desire to have a place to stay or food to eat, is that Kevin Booth (the man with the dog pictured) who lives in Severance Washington found a bag of money outside of the Sumner Community Food Bank about four months ago.

Kevin was tempted to take the bag of money that was filled with $17,000 dollars with him. Kevin after he wrestled with his conscious to do the right thing and turn in the money to an employee at the food bank or keep it for himself.

The employee of the food bank called the Sumner Police Department to report the news of the missing money bag that was left outside.

When the police could not find any evidence of the money being stolen or a person who was thinking of taking their own lives since the person who wants to take their own lives will withdraw their life savings of the bank to donate it to either  charity or a relative, the moneybag  was kept in the lost and found for 90 days.

When the 90 days were up, the food bank received the $17,000 dollars since no one stepped to claim the money.

Kevin came up on the winning side since the food bank rewarded him by giving him some gift cards. Sumner Police Chief Brad Moericke rewarded Kevin with a citation for his honesty in dealing with the money bag that was found outside the food bank.

The food bank will use the money to good use by making improvements to their facility.

Kevin was praised by Chief Moericke for doing what is right. Moericke admitted that anyone else would have taken the money and run away.

Whoever was the person who left the moneybag at the food bank remains a mystery.