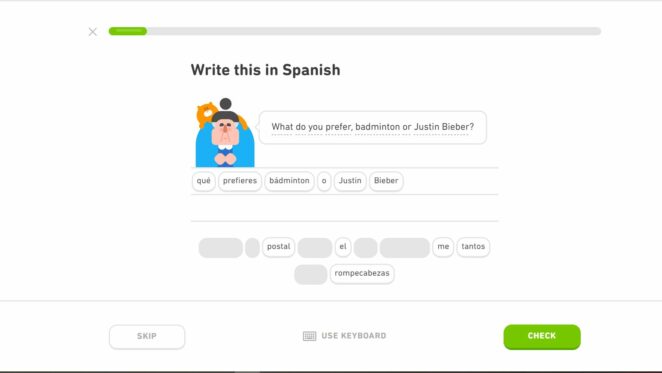 It has been about ten months since I have been using the language learning platform Duolingo almost every day to study Spanish, and in this process I also had, and still have, quite a good time thanks to the funny or thought-provoking sentences I encountered on this exciting linguistic adventure, so I decided to take screenshots whenever I stumbled upon a sentence I found interesting or entertaining and reflect upon it.

For example, one day I had to translate in Spanish the following question: What do you prefer, badminton or Justin Bieber?  Obviously, ordering the words in Spanish to translate this question was not a difficult task, but I also couldn’t stop asking myself what I would choose, and it took me about a second to make up my mind because it was way too easy for me to make my choice!

Badminton versus Justin Bieber is a confrontation that only makes sense when we refer to ways of spending our free time because these are two completely different things, so I imagined that I had two options to spend a nice weekend afternoon: the first one would be to play badminton with my friends, and the other to go to a Bieber concert, in other words, to choose between a dynamic and entertaining sport and seeing live a pop singer I had never cared to listen to before, so without hesitation, I would have picked badminton.

But what if, instead of Justin Bieber, Duolingo would have asked me: What do you prefer: Badminton or Deep Purple/Pink Floyd/Queen/Led Zeppelin/IronMaiden/Whitesnake/Metallica and so on? There are hundreds of artists and bands who make great, less commercial music and who would have easily won the battle against badminton! Even if some of these bands no longer perform or exist, their music will live on for centuries to come, while Justin Bieber will undoubtedly be forgotten in a few decades.

So this is my first analysis of the funny side of this remarkable language learning site: A fairly easy choice to make, at least in my case, but there plenty more stuff to come that makes studying Spanish on Duolingo more entertaining than I had anticipated!