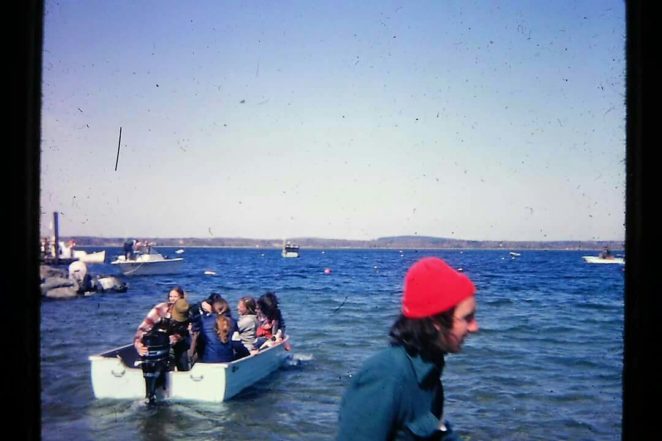 I graduated from high school in June of 1976, uncertain of my next move. I wanted to be a social change agent, to fight the good fight for a better world free of racism, poverty & war. I had a vision of what I wanted to see in the world but no idea how to work towards it.

In the previous year I had picketed a supermarket to support the United Farm Workers grape Boycott, Volunteered for the Cape Ann Council For Children’s Task Force On Child Abuse & Neglect, and worked for the presidential campaign of Senator Fred Harris, a Progressive Democrat who sought to challenge Gerald Ford in 1976. With the Fred Harris Campaign I felt like I was beginning to see a path…many of his volunteers were veterans of Cape Ann Concerned Citizens Against The War In Vietnam & local environmental & feminist causes. I spent one blissful March evening listening to the visionary ideas of Mimi Ferrini after she drove me home from A Harris Campaign Meeting. After a couple of hours sitting in her car talking about what the world could be like I felt a great sense of energy & hope, delighted to know a kindred spirit. That hope was shattered two days later when I read in the paper that Mimi, barely 30 years old, had suffered a sudden brain aneurism & died. I was devastated and depressed for weeks. The failure of the Harris campaign to catch on with Democratic Voters seemed less important now as I looked at a world where once more someone I looked to as visionary had crossed over. It felt pretty lonely.

Gradually I started to resume activities that summer, knowing I would begin studies at Salem State College in the fall. In early August I read that my friend Isabel Natti, a local artist & environmentalist, had been arrested  with 178 others at a sit in in Seabrook, New Hampshire. A nuclear power plant was under construction there & concerns had been raised about the potential harm it would cause to the local fishing industry. The plan’s cooling tunnels would discharge thousands of gallons of hot radioactive water into the ocean, raising the water temperature by 5 degrees and attracting sharks that would destabilize the local fish population. The more I learned about it the more concerned I became. In early September Isabel called me & invited me to join the North Shore Alternative Energy Coalition, the local chapter of the recently formed Clamshell Alliance. Plans were underway to bring two thousand people to Seabrook & occupy the construction site, following a successful model that German activists had used to oppose a nuclear plant in Whyl. I said, “Count me in”. I didn’t realize at the time that over the next few year we would confront the nuclear industry with a nonviolent army (and navy) of protestors & become part of a worldwide movement to support safe renewable energy sources.

The following April Isabel & I would cross a narrow strait with our friend Jay Gustaferro (wearing a bright red hat) and 23 other activists from our community. We were the “Clamshell Navy”, entering the Seabrook Construction Site. We would meet up with close to 1800 other activists and occupy the site. The next day we would be arrested and this action would inspire similar protests around the United States. Clamshell had shown a nonviolent pathway to confront the nuclear industry & power elites using nonviolent direct action. I’m sure Mimi would have been proud.