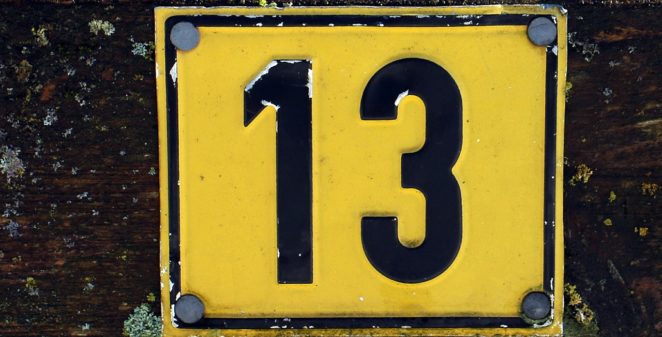 Throughout every corner of this earth, someone looks to avoid the number thirteen at all costs. In some skyscrapers in the world, the 13th floor does not even exist! The superstition surrounding the number 13 that has been passed down from generation to generation is that thirteen is not a lucky number.

Why is the number 13 so unlucky and why are so many people afraid of the number 13? Let’s break away from the mold in order to put this unnecessary superstition to rest.

The answer to the above question can only be located within the realm of spirituality. The number thirteen symbolizes pure evil in the spiritual realm. Let’s take a look at a few examples.

Once again, the theme of gematria will be used. For example, the Greek word for dragon is “drakon (Delta-rho-alpha-kappa-omega-nu).” The sum of those letters is 975. 975 divided by 13 equals 75.

The Greek word for tempter is “peirazo (Pi-epsilon-iota-rho-alpha-zeta-omega).” The total summation of the word equals 1053. 1053 divided by 13 equals 81.

The Greek word “Belial (Beta-epsilon-lambda-iota-alpha-lambda)” equals 78. 78 divided by 13 equals 6. Belial is an ancient English word used as a name for the devil. All of these examples are divisible by the number 13.

People that operate solely in the three-dimensional (length, width, height) realm of earth are apprehensive about anything within the spiritual realm, which is four-dimensional (length, width, height, depth). People that cannot grasp spiritual things will be afraid of the number 13 because they are unaware of the spiritual symbolism of thirteen. They are unable to fight back against their adversary because any form of evil can only be defeated using spiritual means. Therefore, people that are afraid of the number 13 are actually afraid of being unable to defend any attack the adversary throws their way.

However, there are a couple of easy tips on how to defeat evil.

1. Realize that good always defeats evil in the end. Anyone can look back into history to see that all sorts of dictators and tyrants always lost in the end. Somehow, good always is victorious over evil.

2. Go back to the word Belial for this next tip. Belial means “worthlessness.” Realize that evil is worthlessness. Do not value or treasure evil within your mind.

With these two tips, anyone will be able to understand that the superstition of 13 being an unlucky number is pure hogwash.