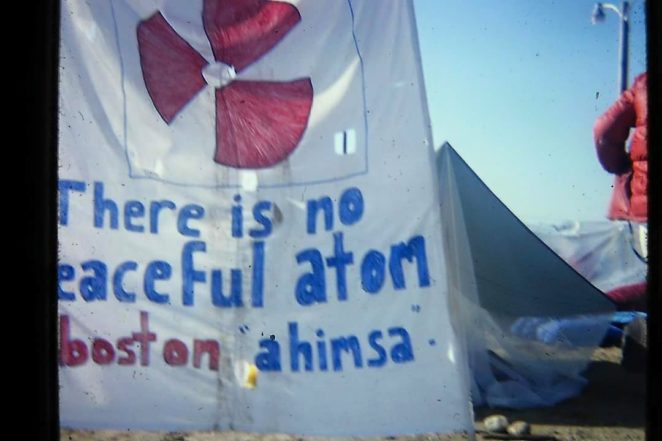 The Seabrook nuclear plant was commissioned in June 1989, after a 13 year struggle. On June 5, 1989 over 4000 people demonstrated against the plant and 627 of us were arrested. We gathered at the Greyhound Racetrack that had been Seabrook’s claim to fame before it became the battlefield & symbol of America’s struggle over nuclear power.  Three thousand demonstrators marched to the site. Unlike the early days of demonstrations when we were treated like suspected terrorists, this civil disobedience action took place with an air of congeniality…like we were repeat customers. It seemed surreal when I recalled the days of having my arms twisted behind my back & N.H. State Trooper Barrett threatening to “beat the shit” out of me if I returned to the site.

We had failed to stop the construction of and operation of the Seabrook power plant. We had succeeded in giving birth to a nationwide movement that crippled the Atomic Power Industry in the United States, resulting in the cancellation of over 100 planned or proposed nuclear power stations. The spectre of mass demonstrations was enough in most communities to close the door on new construction.

Anticipating that this might be a bit more than our usual drive thru civil disobedience action I arranged to take several days off for work. I asked my neighbor Thanh to feed my cats. I tried to explain to her in simple English what was happenening at Seabrook and how it might affect her and all of us who lived on Massachusetts’ North Shore. She looked at me and while listening intently it was clear she wasn’t comprehending much. “Can you bring me a lobster?” she asked. I kissed her cheek and promised I’d bring the two biggest ones I could find.

I met up with my former housemate Jeanine, my long time friends Marcia, Josh & Babette, and my mentor Isabel. It was like old times. By early afternoon we had all been arrested, put on schoolbuses and driven to the snazzy new Seabrook police station. We were processed quickly and courteously, issued a citation similar to a parking ticket. I was later told that almost every person pleaded not guilty rather than pay the $100.00 fine and that in a matter of weeks all the cases were dismissed. We were no longer considered a menace to society. Indeed, many officials and police quietly confided that they viewed the power plant to be the real menace and threat to their town. By 6:00 P.M.I was out free and drove to Woodmans in Essex to buy two live lobsters for Thanh..