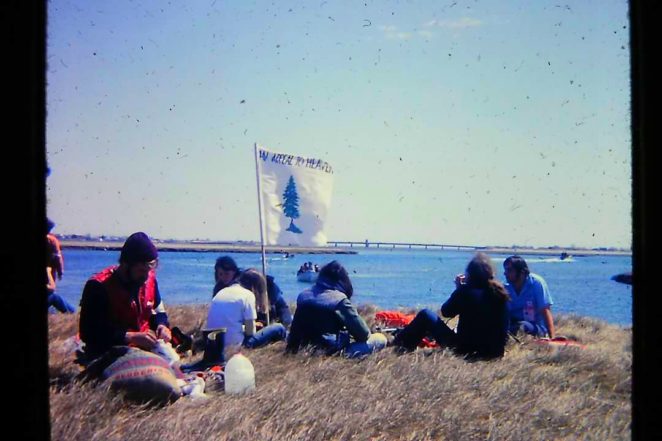 After midnight on May 2,1977 I was arrested for criminal tresspass at the Seabrook Nuclear Power plant construction site. I climbed onto a bus not knowing where I was going or what was going to happen next. The processs of arresting over 1400 people had started around 3 p.m. the previous afternoon & would continue for several hours more. We were driven to a National Guard Armory in Dover where they booked us, finger-printed & photographed us. Somebody wrote “No nukes” on my forehead right before the mugshot was taken. I smiled & the camera flashed a “V” sign- there I was probably the happiest mugshot on history.

Sometime around 4 a.m. they gave us cots & we finally settled in to sleep. Waking up a few hours later surrounded by armed & uniformed National Guardsmen seemed surreal. We would learn later that New Hampshire Governor Mel Thompson had received “Intelligence Briefings” from Lyndon Larouche’s U.S.Labor Party. They had told the Governor that the Clamshell Alliance was part of an international conspiracy of the Red Brigades & we had set out to occupy Seabrook with no intention of leaving the site alive. It must have been a stunning surprise for the governor to find we were just an odd collection of hippies,college kids, Quakers & peace activists.Over the next 9 days we would build communities, network,  hold workshops, sing & play together in an amazing show of solidarity. I was technically a prisoner but felt a greater sense of freedom,inner peace and  joy than I had ever encountered elsewhere.