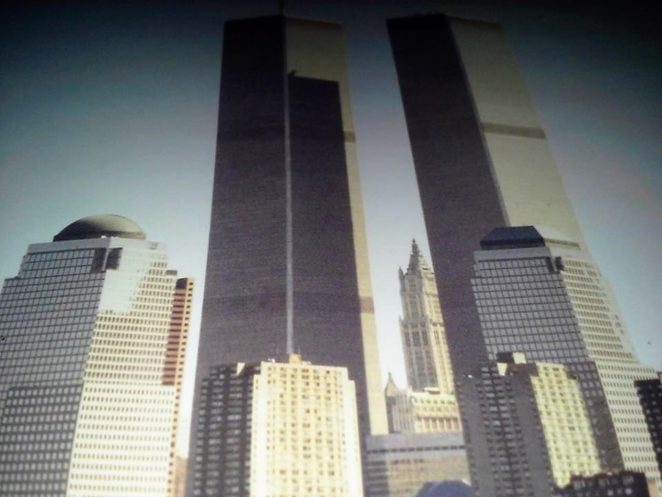 Kathy and I were looking forward to the weekend to celebrate her birthday & drive to New Jersey. It was a bright sunny morning that had started strangely: at 5:00 A.M. we were awakened to the sound of loud sirens. I climbed out on the 2nd floor landing  roof of the apartment- apparently there was a fire on Liberty Street, not far from where we lived. Looking back it seems like an omen.

That morning we were having breakfast, watching television at 8:46 A.M…. we saw what I at first thought was some kind of special effect: it didn’t look real. Within minutes we learned the painful truth. Religious fanatics had used jet airliners as weapons to kill thousands of innocent people.

A couple of hours later I learned they had crashed a plane into the Pentagon, where my brother in law Mark Walker was employed. We called up to see what was going on and were relieved to hear he was out of the building that morning. The rest of the day was surreal, I went to work and everyone was in shock. Much time spent contacting friends & relatives & praying. We knew things would never be the same.