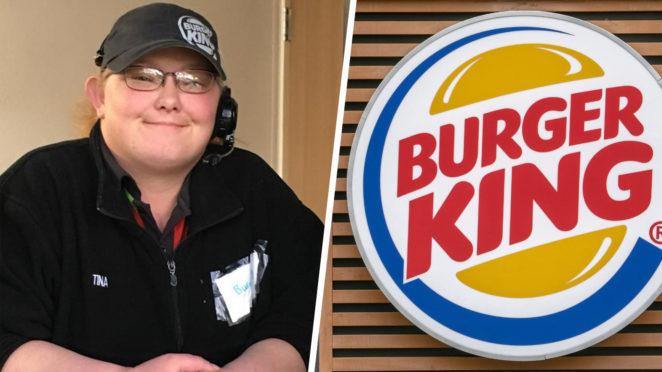 A Burger King customer service representative named Tina Hardy is being called a hero for her quick thinking in her actions of assisting Rebecca Boening who is diabetic having trouble trying to stay awake.

Rebecca was drving her auto on Interstate 40 in Amarillo Texas on Wednesday when due to her diabetic condition she started to have feel ill and she needed to get some food and drinks into her system as soon as possible.

Rebecca got off the earliest exit on the Interstate and pulled up at a Burger King restaurant where customer service representative Tina Hardy took action after giving Rebecca a cup of ice cream so she can feel better and recover from her health scare.

After Rebecca paid for her meal, Tina told Rebecca to park her auto in the parking lot so Tina would watch her until she had fully recovered from her health scare.

Rebecca then asked Tina to speak with her manager at the Burger King store where she was served a meal so she could report the good deed Tina did for her.

Tina is amazed that she has become famous on Facebook due to her heroic deed in assisting a customer who battling a health scare when her heart started to run faster to the point that if Rebecca did not seek help when she did, there is no telling if she would have survived the consequences of her diabetic attack could have been fatal.

Tina is a credit to all of us fast food employees who have the butt of jokes from comedians worldwide as a job that is only given to high school and college students with a minimum wage to boot.

Or the negative publicity when an employee at a fast food service store refuses to serve a police officer in uniform due to political differences.