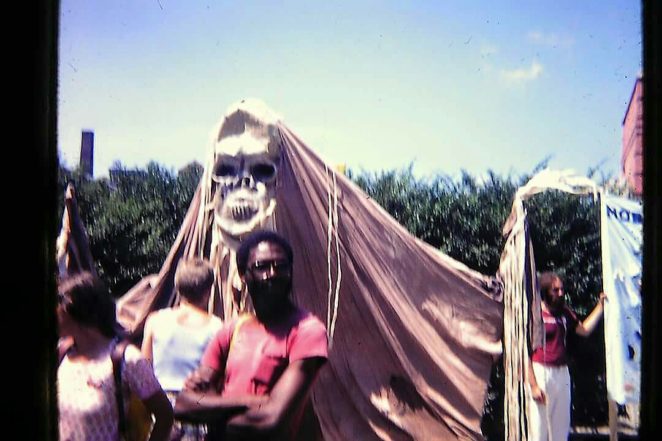 I rented a Pontiac Sunbird with my friends Kristi & Mark from Brown University & a couple of their friends. We drove from Providence Rhode Island to South Dakota for an international gathering sponsored by the American Indian Movement & the Black Hills Alliance. It was to raise public awareness and oppose the Nuclear Industry’s plan to strip mine Uranium on the sacred Indian land called the Paha Sapa in the Black Hills. On the day we arrived & were checking in I was waiting in line when suddenly someone came from behind and covered my eyes saying, “Guess who?” I recognized the soft voice & the familiar Jasmine & Patchouli oil scents in a heartbeat. It was Kathe Camara, who I had not seen since our bitteweet goodbye at the Denver Greyhound Station the previous spring. Huge hugs, and a warm happy reunion added to the magical quality of that week. Each day we listened & learned from Indian & anti-nuclear activists. Russell Means, Winona Laduke, Daniel Ellsberg, Dr. Helen Caldicott. Two years in college couldn’t teach what a few days in the sacred Paha Sapa taught me. Every night after the rallies and teach-ins we heard great music from Floyd Weston, Jesse Colin Young & Jackson Browne. We camped in the open air under the stars. It was a beautiful & inspiring week.