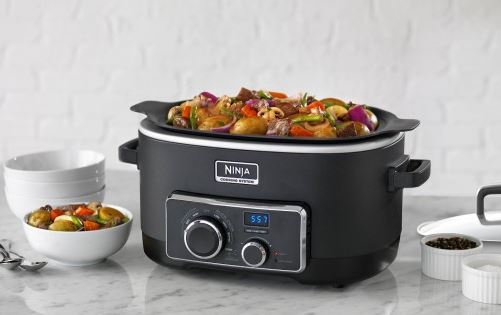 One day I was at the nail salon, getting my nails done. There was a television on the wall right above the head of my manicurist, so I was just idly watching it. An informercial came on for a crock pot looking thing, so since I really had no choice, I watched it.

The infomercial was for an 3 in 1 cooking system called a Ninja. It is a large crock pot sized appliance that can cook just about anything, any way you want. This appliance cooks like an oven, stove top, crock pot or steam roaster. You can even bake desserts in it. By this time, I was becoming interested. I started actively watching the infomercial and the more I watched the more impressed I became.

One of the things that I was most interested in was the one pot meal feature. They claimed you could throw in meat, pasta, veggies, and sauce, turn it on and walk away for 30 minutes. When you returned, the meal was done and ready to serve. That sounded perfect for me! Since I work at home, that type of cooking would be a real time saver.

Another thing that the Ninja did that sounded really cool was the steam roasting feature. You place the basket in the Ninja, put three cups of water in the bottom, lay your meat or fish, potatoes and vegetables in the basket. Sprinkle some spices on it and cover. The items cook perfectly and 30 to 45 minutes you have a meal, ready to serve. I was thinking to myself……could this thing really work that easily?

The Ninja is also a slow cooker, but the cool thing about it is that you can brown your meat and saute your vegetables right in the cooker, on the stove top setting, and then flip it to slow cooker and add the rest of your ingredients, cover and walk away. Less dishes to wash. Again, I was impressed. So impressed I wrote down the info so I could look it up online when I got home.

I Thoroughly Checked Up on the Ninja Cooker

When I got home, I checked out their website, looked at their videos, and read their reviews. The reviews were all glowing which made me suspicious. How could a kitchen appliance be that wonderful? So I did what I usually do when I am considering buying something that is pretty expensive. I turned to Amazon.com. Amazon leaves all the reviews, good and bad, that is why I trust them. So I found the Ninja on Amazon, and I opened the reviews. Other than one, the reviews were all good and many were as glowing as the ones on the product site.

I also Googled it, and read a few “independent” reviews. All basically said that the Ninja lives up to all the claims that they make on the infomercial. Well, I was convinced, so I ordered it from Amazon (they were cheaper than the product site) and in Amazons usual style, it was here in two days.

I proceeded to put it through its paces. I tossed uncooked spaghetti, frozen meatballs, mushrooms and sauce with 4 cups of water and turned it on. Twenty minutes later, I removed the lid and stirred and served perfectly made spaghetti. Clean up was also a snap, just rinse it out and wipe with a soft paper towel, The next day, I put two cups of water in the bottom, put in the basket, and unwrapped a small frozen pork tenderloin. I put the tenderloin down the middle and filled one side in with baby carrots, and the other side with small new potatoes. I sprinkled in some herbs and spices and put the cover on. One hour later, I had a perfectly seasoned and cooked dinner to serve!  It worked perfectly!

I recommend this appliance, it is really useful and time-saving.  I use mine all the time!  For once you really can believe what you see on TV.