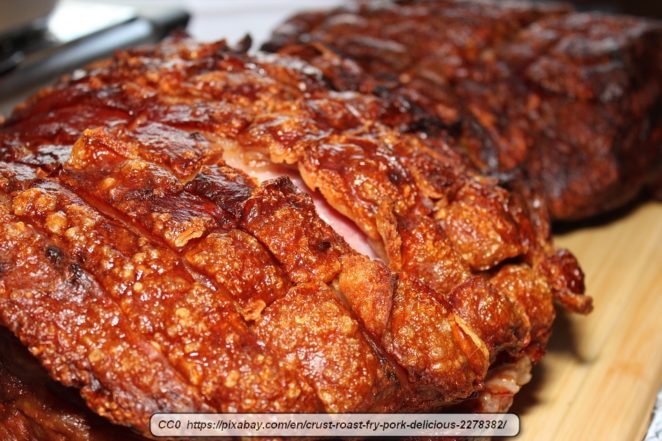 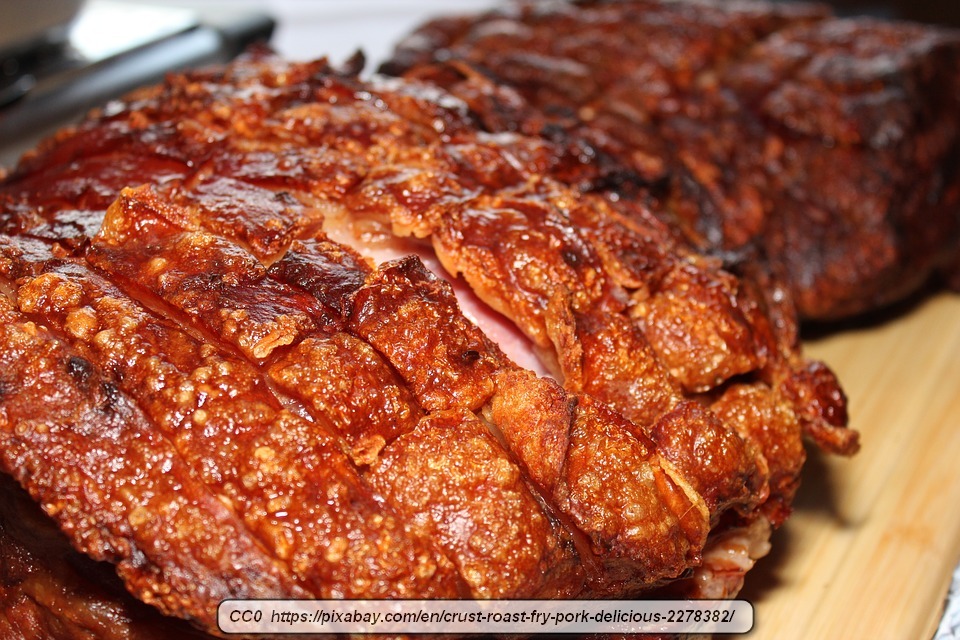 Don’t let the name fool you. This pork roast doesn’t end up tasting really salty, but it is incredibly moist and the flavor of garlic sinks deep into the meat without being overpoweringly strong.

The secret is in the salt crust. This surrounds the meat like a blanket, but it quickly hardens on the outside. When it hardens, it seals in the juices and flavors, so the meat cooks in its own juices and the flavors of the garlic sinks through the meat without becoming unbearably heavy. If a person dislikes the flavor of garlic, though this seems to be rare, onions can be used in place of the garlic, too. Either way, the roast ends up moist and tender, as well as being quite flavorful. It often practically falls apart.

Don’t worry about the salt crust, either, because that part is thrown away once the roast is done.

1. Combine the flour and salt, mixing well, then pour in the water while continually stirring. The goal is to make a thick, heavy dough that will surround the meat, so add water until the consistency is that of a thick dough, kneading it by hand as it gets closer to that consistency. If the dough is too thin, it will fall off the meat and if it is too thick, it will be hard to manage and may crumble as it cooks. You can thicken the dough if it gets too thin by adding more flour and salt. To make it thinner, simply mix in more water.

2. Once the dough is prepared, put it on a floured surface and roll it out until it is about a quarter of an inch to a half an inch thick.

3. Place the roast in the center of the dough, sprinkle it with sage, then add the garlic, followed by the pepper rings. Carefully draw the sides of the dough up over the roast so they meet on top and crimp the edges together to seal in the roast.

4. Carefully transfer the covered roast to a baking pan. It can be helpful to have an extra pair of hands helping with this stage, so the dough stays together and around the roast, and completely covers the meat.

5. Bake at 350 F for 1 1/2 hours. By this time, the dough should be brown and quite hard on the outside. It is often necessary to chisel the crust open with a hammer and a butter knife. Take care, though, as when you break through the crust, hot steam is likely to escape. Don’t burn yourself!

6. Remove the salt crust and discard, then slice the roast and serve. This may be difficult because the roast is often so tender it is hard to slice without the roast falling apart.

This dish goes very well with mashed potatoes and a green salad, perhaps with tomato and cucumber slices on the side. As with most pork, applesauce is a natural complement to the meat. Fresh fruit makes an excellent dessert.