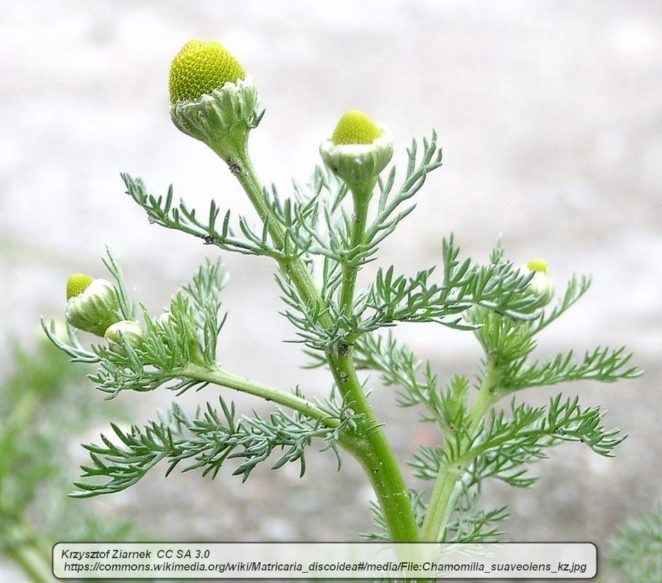 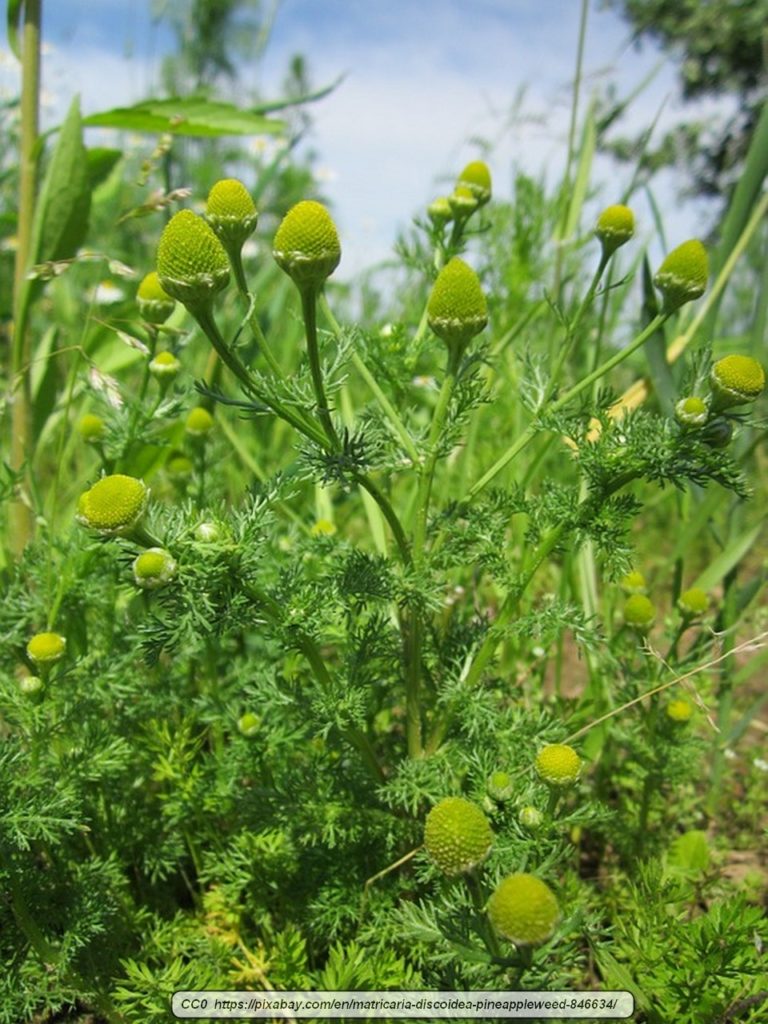 One of my favorite weeds is pineapple weed. The scientific name is Matricaria matricariodes. Some sources list the scientific name as Chamomilla suaveolens. Either way, it is closely related to chamomile and the leaves look distinctly like those of chamomile. Crushing the leaves also releases the quite noticeable and agreeable smell of pineapples, hence the name.

This plant is sometimes confused with wild chamomile (Chamomilla recutita), though it is a different species. The pineapple scent is a strong identifier of the plant, though. 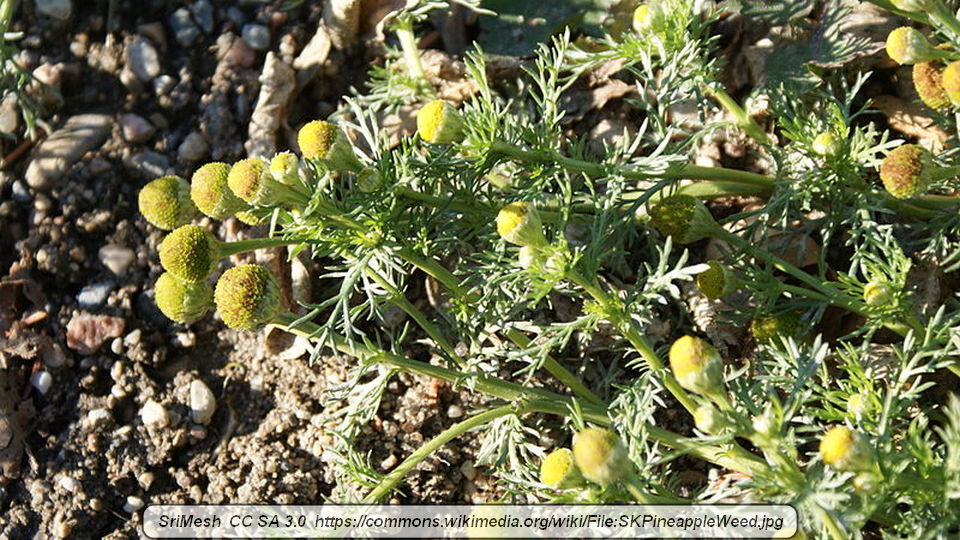 Depending on where it is growing, this annual weed may grow up to a foot and a half tall or it may be low growing, seldom getting more than a few inches in height. It grows well in most soils and the shorter plants tend to be those that grow in nutrient-poor dirt.

The leaves are feathery and are usually denser in good soils than in poor ones.

The flowers are button to conical in shape and are green to yellow in color. The blossoms don’t really stand out and they aren’t particularly pretty. However, the blooms are also stronger in the pineapple scent. The smell is helpful in identifying this edible weed. 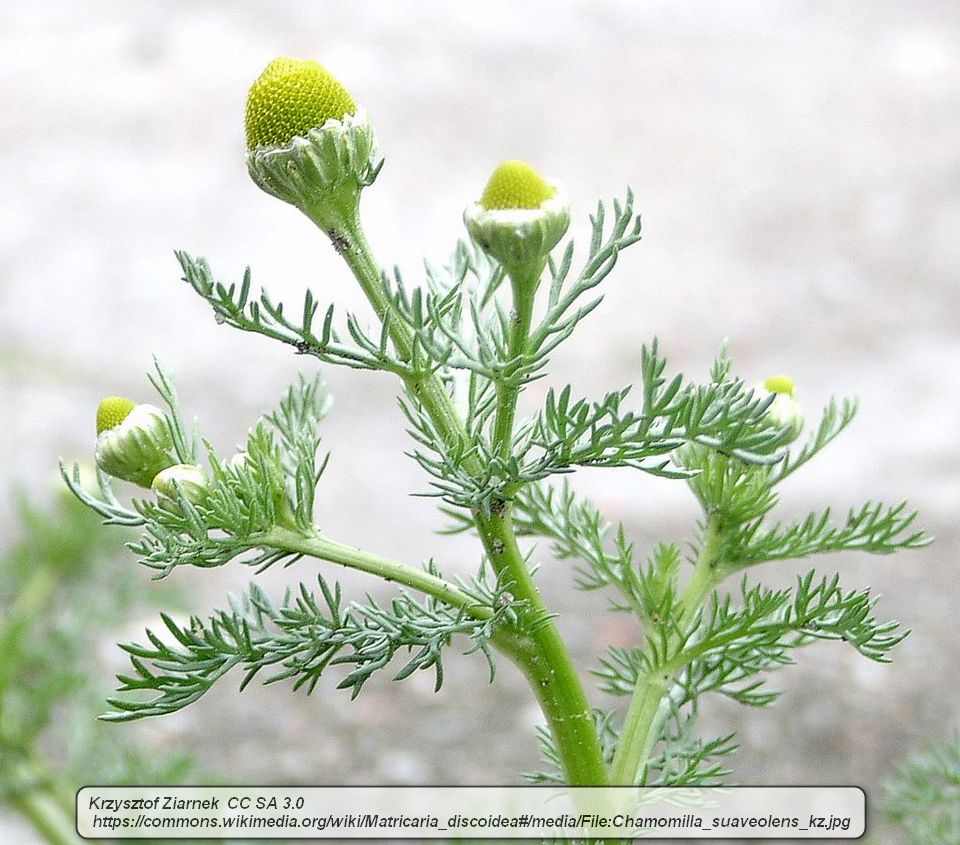 This closeup of pineapple weed shows the feathery leaves and small conical flowers.  Each of the flowers is less than a quarter-inch in size.

This is a wild weed that is quite edible and tasty. The flavor is much the same as the aroma; like pineapple. The leaves and the flowers can be added to green salads for a delightfully different flavor or hint of flavor. The flowers can also be added to regular tea or iced tea to give it a slight pineapple flavor. Some people also like adding the leaves and flowers to cakes and cookies.

The fact is that this plant can be used to make a healthy, relaxing, pineapple flavored tea by brewing it as you would brew chamomile tea. A tea ball full of leaves and flowers added to hot water is all that is needed. It can be sweetened with honey, if you prefer sweet tea, though the flavor is sweet even without the honey.

Since pineapple weed is related to chamomile, it has the same health benefits that chamomile has, in varying degrees. This makes it a great tea to make prior to bedtime, to help make your sleep a restful one. It is also good for easing anxiety.

Around here, we don’t have to go far to find some, since it grows at the edge of our driveway, in poor soil that dries out thoroughly every year. I like it so much that it is likely that I will try growing it in a pot this year just so we’ll have a continuous supply.

Considering that pineapple weed is commonly found growing in waste places, it often isn’t hard to find some growing. If you come across this plant, don’t pass up the chance to add it to your larder.