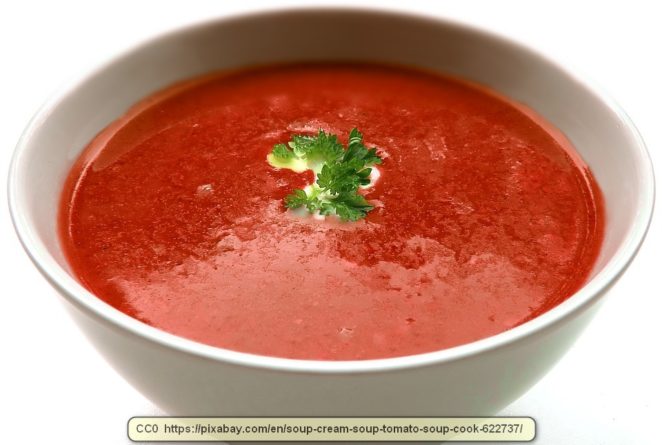 Tomato soup is a lot easier to make than most people probably think. The following recipe is high in vitamins, particularly vitamin C, filled with antioxidants, high in minerals, and best of all, it is quite delicious and easy to make.

There are a couple of things to note before getting to the recipe. The first is that this can be made with stewed tomatoes, however, my preference is to use fresh tomatoes. If you use Roma tomatoes, the flavor will not only be phenomenal, the soup will also tend to be thicker since Roma tomatoes are meatier than regular slicing tomatoes.

The thickness of the soup can be varied by adjusting the amount of tomatoes and broth, though. Also, it should be mentioned that if you want a vegetarian version, substitute vegetable broth for the chicken broth and omit the bacon/ham.

If you want soup with a creamy consistency, run the ingredients through a blender before cooking them. This can also be done after cooking, but the soup will need to be cool enough to blend, then will need to be heated back up for hot soup.

2 slices bacon or a slice of ham, chopped

1. Heat the ingredients except for the herbs over medium heat until the broth is boiling.

2. Reduce heat to a simmer and cook until the carrots and onions are tender, about 20 minutes, stirring often.

3. Add the basil and parsley, then cook an additional 5 minutes.

If you like soup that has a bit of a zing, a few diced chili peppers, such as jalapenos or Pablanos, can be diced and added in the first step.

The tomatoes can also be peeled before they are cooked, if you wish. To do this easily, put the tomatoes in boiling water for two minutes, then put them in ice water. When they are cooled enough to handle, the skins should come off easily.

This soup is tasty and filling. This recipe makes quite a bit, but excess can be frozen or canned. The soup can also be reheated easily for another meal. In fact, this soup is great when used as a base for sauces, including spaghetti sauce or barbecue sauce. I generally double or triple the recipe and can it, so I can have wonderful fresh tasting tomato soup in the middle of winter.