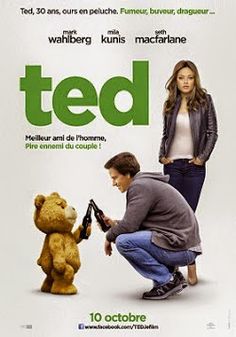 Family guy is one of my favourite television series. For instance, I love everything that Brian, the dog, experiences. Likewise, the creators of Family Guy have made other series and even movies. Ted is one of the movies they have done and is similarly hilarious. Ted is written and directed by Seth MacFarlane.

Ted is a teddy bear who lives with his owner, played by Mark Wahlberg. The problem comes when Mark Wahlberg grows up and asks Ted to find a job to pay the rent. Ted, who talks and behaves like a person even though he is a toy, goes to a job interview but he does not really want to work as he loves partying.

Ted is a very funny movie, they even released the second part. I find this character really humorous. Take a look at what happens when Ted tries to find a job. Have you watched Ted? Do you like this clip???