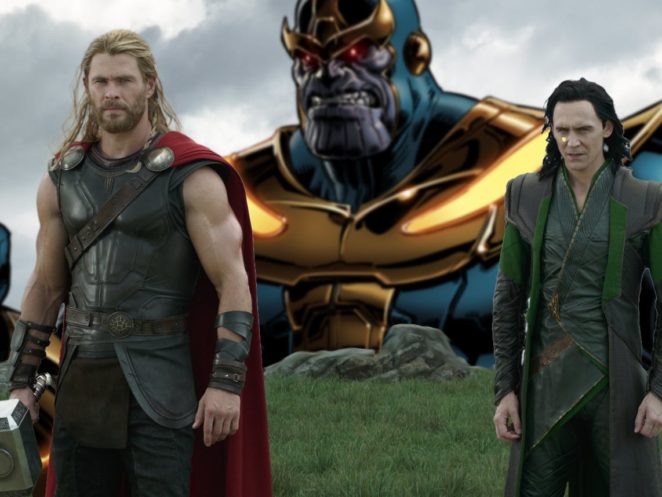 I loved the first Thor film and its irreverent funny side but did feel the second film was a bit samey and so hoping the third movie was back on form. It was and some. The phlegmatic and funny Aussie side of Hemsworth is back and having Taika Waititi on board as director and bit part comic turn was a masterstroke. If you have seen the Flight of the Conchord’s you knew he would be fun and different, what Marvel films need now as we are overrun with the genres pithy superheroes. Thor Ragnarok would be the third Marvel film releases in 2017 alone, along with Guardians of the Galaxy Vol. 2 (2017) and Spider-Man: Homecoming (2017), the first time the Marvel Cinematic Universe has released three films in the same year. It could be four this year (2018) as the behemoth of Marvel Avengers: Infinity Wars explodes in our multiplexes in a starburst of special effects and Hollywood talent tumbling from the skies.

-The trilogy so far-

Thor: I don’t hang with the Avengers anymore. It all got too corporate.

Thor: [to the Hulk] So much has happened since I last saw you! I lost my hammer, like yesterday, so that’s still fresh. Then I went on a journey of self-discovery. Then I met you.

Two years after the battle of Sokovia (film two), Thor (Chris Hemsworth) has been unsuccessful in his search for the Infinity Stones as we join him chained up on the fiery plant of Muspelheim facing impending doom from the fire demon Surtur. Surtur gleefully tells Thor’s that his father Odin (Anthony Hopkins) is no longer on Asgard, and so the 5th realm of nine will soon be destroyed in the prophesied Ragnarök, once Surtur unites his crown with the Eternal Flame that burns in Odin’s vault. Well we all know that’s not going to happen as Thor starts kicking butt.

Thor returns to Asgard to find a lazy kingdom and his brother Loki (Tom Hiddlestone) using his powers to pose as Odin to pass the time and amuse himself. Thor decides Loki should help him find their father, regardless of previous betrayals, and with directions from Dr Strange (Benedict Cumberbatch) living back on Earth in New York, where they thought dad was in a rest home, they locate Odin in Norway where the Gods normally hangout. Odin has bad news for his sons and warns them he is near death and so his power and the Nine Realms will pass to his firstborn child, Hela (Cate Blanchett), sealed in a prison a long time ago but will soon be free as a dead Odin can’t contain her. Hela was a big name back in the day and had been the leader of Asgard’s armies, conquering the Realms alongside Odin, but written out of history after Odin feared that she had become too strong and ambitious.

As soon as Odin dies she appears to face Thor and Loki there and then, the boys no match for her power, jumping a ride in the Bifröst Bridge, to Asgard before they can stop her, booting them out of the mythical wormhole mid trip to leave the boys lost in time and space to die alone as she takes over Asgard. Odins armies stand no chance as she plans to use the Bifröst to expand Asgard’s empire, the temporary keeper of the gate, Skurge (Karl Urban), the only one willing to be onside with their new leader, the rest fleeing to the hills with Heimdall (Idris Elba) and the mighty sword that opens the Bifrost.

The two sons crash-lands on Sakaar, a garbage planet surrounded by wormholes. A sexy bisexual slave trader (Tessa Thompson) subdues Thor and sells him on to the ruler of this Godforsaken planet, The Grandmaster (Jeff Goldblum), with whom Loki has already become ingratiated. But how to get off this planet and save the Nine Realms and sort out there sexy sister?

Loki: I have been falling… for 30 minutes! 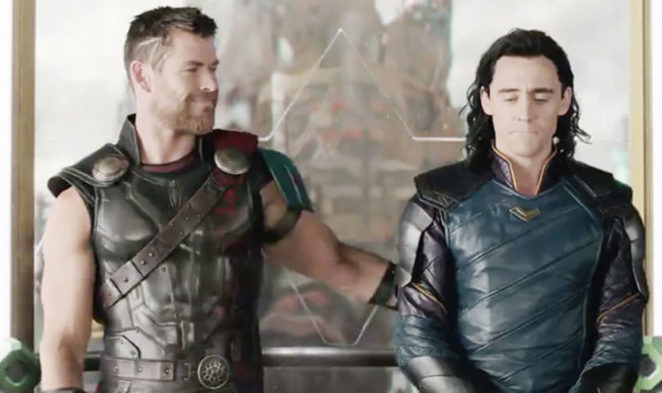 Its great fun and Thor back on top. Hemsworth is sexy and funny and a big slice of greasy ham from Goldberg keep the mood lite throughout. DC Comics take themselves far too seriously and that’s why Marvel dominates them in the multiplexes. Strong female characters here amp up the increasing feminist following of these movies and Cate Blanchett eats up the scenery as Hela as the girls elbow Idris Elba and Loki into the background. Blanchett quipped that if she takes the role of Hela, it’d be a career boost long needed. Aussie girls are not like America girls. They don’t forget where they came from, which is paradise.

This was the first film the hulk appears in that Lou Ferrigno didn’t voice and so the final umbilical cord cut from the old camp era of superhero movies for me. It was terrible back then and who on earth though Ed Norton would make a good Hulk? His career has not recovered.

Kiwi fun director Taika Waititi cited Big Trouble in Little China (1986) as a major influence on the film and was clearly going to own this movie. The mischief continues as the names of the various space ships in this movie are a nod to Australia’s Holden car brand (Aussie Fords). They are model names of various iconic models, such as the Commodore, Torana, Statesman and Kingswood. If you have been to Australia you know they love their cars. It’s that kind of beery humor that makes Thor fun.

If you did tire of Thor in film two then jump back on the horse here. It out on DVD this winter and has some fun extras. It’s funny, irreverent, and different and a blast and the special effects in full blast. I like that it actually sticks to the Norseman myths and so some structure to the story. It does get a bit too comic centric at times but it remains entertaining so job done.

The Atlantic –‘Perfectly acceptable as an action movie but inspired as a comedy–which is probably where the Thor franchise should have been aiming from the start’.

Globe & Mail –‘The idea of pairing the oft-dull Thor with a series of oddball companions is an inspired, if necessary, move – so much so that it’s baffling it has taken Marvel this long to smarten up’