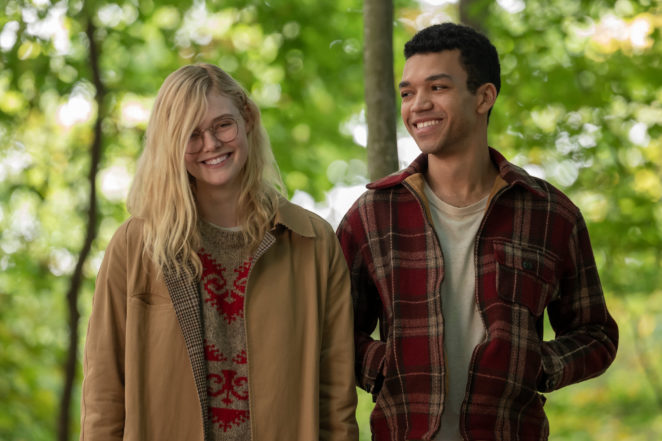 I just turned this movie on after finished watching something else.

From what I can tell is that Violet Markey and her family moved from California to Indiana. She lost her sister and has a fear of getting in a car. She does not want to go out and her friend is having a party, and she does show up. I think it is possibly her boyfriend that comes over to her at the party and tells her it is time to snap out of what she is feeling about her sister dying. She leaves. Another young man called Theodore Finch is fascinated by her. He likes to run at night and saw her standing on a bridge and so instead of leaving he gets up on the bridge too and she does get down. She is in a class of his and the teacher wants them to do a project on Indiana and he chooses her as his partner. He coaxes her to get out and to smile and laugh. One day at school her friend told her of an incident with him and the boy that liked her and so she said to him she did not want to do the project with him anymore. He shows up at her house and her father is watching him laying on the lawn and she asked the father what he was looking at. The father tells her there is a boy laying on the lawn. She goes out and finds Theodore there. We still do not know exactly what happened to her sister. Theodore wants to take her for a ride and she continues to say no but then she gets in the car and while they are driving she is starting to talk about it. I did not hear all. I did hear about a bridge and her waking up in the hospital. That is as far as I have gotten. This is a very beautiful movie that I recommend you check out.