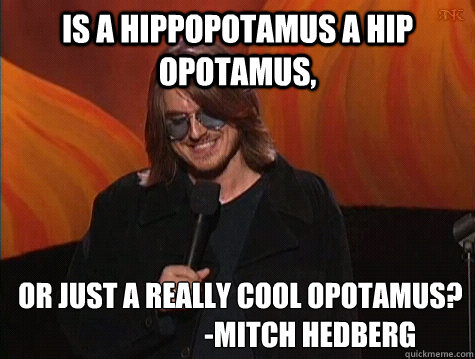 One of my favorite comedians was Mitch Hedberg.  I say “was” because he passed away in 2005.  I have heard a lot of comedians over the years, but Mitch was just so different.  One thing I didn’t like was that he was a drug user.  Some of his jokes were about drug use.  He also used a lot of profanity.  Those are really the only two negative things I have to say about him.  He was still hilarious despite those two facts.Researching about his life, I found out his death was caused my drug overdose.  It’s sad that a lot of people go out that way.

I would like to share a few of his jokes with you all.  “You know, I’m sick of following my dreams, man. I’m just going to ask where they’re going and hook up with ’em later.”

“On  traffic, light green means ‘go’ and yellow means ‘yield’, but on a banana it’s just the opposite. Green means ‘hold on,’ yellow means ‘go ahead,’ and red means, ‘where the hell did you get that banana at?’ ”

“I haven’t slept for ten days, because that would be too long.”

I walked into Target, but I missed. I think the entrance to Target should have people splattered all around. And, when I finally get in, the guy says “Can I help you?” “Just practicing.” ”

“When I was a boy, I laid in my twin-sized bed and wondered where my brother was.”

Were you a fan of Mitch Hedberg? If so, what were your favorite jokes of his?  I would love to know what your favorite thing about the comedian was.