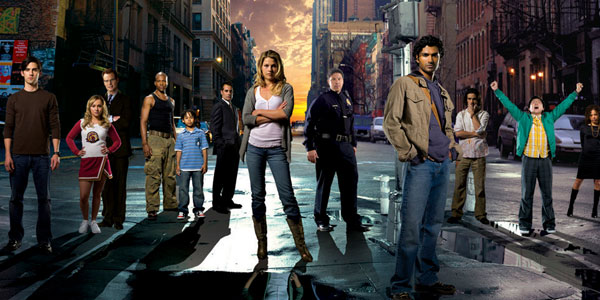 Done watching the last episode of this American psychological thriller sci-fi TV drama series that was aired on NBC for 4 seasons from Sept. 25, 2006 – Feb. 8, 2010, and created by Tim Kring. A story of ordinary people who discovered themselves having superhuman abilities.

With the main casts: Hayden Panettiere (KirbyReed of Scream 4) as Claire Bennet, a high school cheerleader who can spontaneously regenerates;  Milo Ventimiglia (Jason Lennon of Gotham) as Peter Petrelli, a hospice nurse with the ability to mimic others with superpowers;  Adrian Pasdar (Glenn Talbot of Agents of SHIELD) as Nathan Petrelli, a congressional candidate who can fly; Japanese Masi Oka (Darin Arturo Morena of  Friends with Benefits) as Hiro Nakamura, an office worker who can manipulate space and time; Greg Gunberg (Snap Wexley of Star Wars: The Force Awakens) as Matt Parkman, a police officer who can read minds; Indian actor Sendhil Ramamurthy (Raj Andari of CSI Miami) as Mohinder Suresh, a geneticist who looks for superpowered humans who later acquired bestial superstrength; Jack Coleman (Bill Forbes of The Vampire Diaries), a Primatech worker who tracks people with abilities; Japanese James Kyson (Mark Wong of Sleepy Hollow) as Ando Masahashi, has the ability to supercharge any superpowers; Cristine Rose (Mrs. Iglitz of 7th Heaven) as Angela Petrelli, who can see future thru her dreams; and Zachary Quinto (Spock of Star Trek) as Sylar, a superpowered serial killer who targets other superhumans to steal their powers…

Its first season garnered 14.3 million viewers in the US, receiving highest rating for an NBC drama premiere in 5 years. This series won numerous awards and nominations , including Primetime Emmy Awards, Golden Globes, People’s Choice Awards, & British Academy Television Awards. Due to its successful airings, it has an online extension entitled Heroes 360 Experience, which was later rebranded as Heroes Evolutions. Then, a 13-episode miniseries entitled Heroes Reborn was later premiered on NBC on Sept. 24, 2015 .

I may be too late for watching this, but watching this series in 4 seasons is so far so good. It’ll take you somewhere to different timelines, that will surely entices your longing eyes to see inevitable twists in one of the most nicely done TV series on the face of the Earth, long since Game of Thrones was produced (hehe). Nothing more I can say, deserves a standing ovation from a couch-potato like me though. (lol)