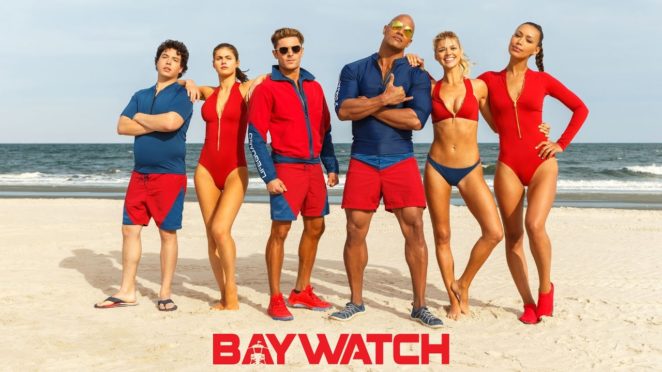 Baywatch is a 2017 American action comedy film based on a 1989-2001 TV series of the same name that ran on 11 seasons, where David Hasselhoff cast as the lead role. This time former professional wrestler Dwayne Johnson aka The Rock lead the cast as Mitch Buchannon, who calls himself lieutenant with his team of lifeguards including second-in-command Stephanie Holden, played by Ilfenesh Hadera (Judy of Old Boy), and veteran CJ Parker, played by Kelly Rohrbach (Beatrice of Wilt), protect the beaches as well as the bay as part of an elite division called Baywatch.

This movie was first released on May 13, 2017 at Miami, USA with 116 minutes running time. It has a production budget of $69 million and grossed to $176.9 million for its box office income.

Also in the cast were: blue-eyed gorgeous actress Alexandra Daddario (Annabeth of Percy Jackson / Blake Gaines of San Andreas / Lisa Tragnetti of True Detective), who played as Summer Quinn, one of the 3 applicants who qualified to become Baywatch lifeguards. This is also a second movie where she and The Rock joined again in a film (first one is from San Andreas); Zac Efron (Troy Bolton of High School Musical) also cast as Matt Brody, a former Olympic gold medal swimmer, who was also qualified for Baywatch; Jon Bass (Phil Hirschkop of Loving) as Ronnie Greenbaum, a chubby nerd who has a crush on CJ Parker and one of the 3 who made it to the Baywatch elite lifeguards; and Bollywood actress Priyanka Chopra (Alex Parrish of Quantico) as Victoria Leeds, the main antagonist in the story where she smuggled drugs called flakka.

Former Baywatch TV series cast David Hasselhoff and Pamela Anderson made their cameo role as The Mentor and Casey Jean Parker respectively. This movie is really about lifesaving, since lifeguards are not only as good swimmers, but also as fighter heroes against drugs.

This movie though doesn’t fully promise you lots of actions and stunts, yet still quite could bring you laughter since they add up some few funny punchlines especially when The Rock bullies the character of Matt Brody, yet just for fun. This is still worth to watch, where the legends of Baywatch such as David Hasselhoff, Carmen Electra, Pamela Anderson, and Jeremy Jackson were molded into promising actors and rose to fame. Two thumbs up!!!