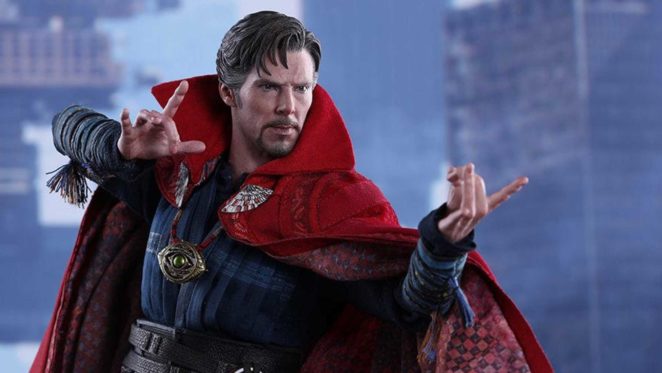 So Dr Strange, one of the lesser known Marvel superheroes to arrive on our cinema screens in the Marvel Universe in recent years, one you would have to meander down a comic book B-Road to find instead of being run over by the big names on the noisy Marvel motorway. Benedict Cumberbatch is not your typical leading man either for this type of action hero movie but he is intelligent screen presence and has a rather strange face so ideal casting for a sort of time traveling American style Dr Who, here. The fans loved it though and for its special-effects packed $155 million dollar budget, director Scott Dickenson film did $677 million back and the sequel sure to follow soon.

Benedict Cumberbatch’s co-star is the rather homely Rachel McAdams, the fourth film of her career where she plays a love interest to a man who can travel through (or otherwise manipulate) time; The Time Traveler’s Wife (2009), Midnight in Paris (2011), and About Time (2013) the other three. In none of these movies does McAdams’ character actually get to participate in these time travels or manipulations. She is token time travel totty.

In Kathmandu, Nepal, the sorcerer Kaecilius (Mads Mikkelsen) and his heavily armed followers enter the secret compound of Kamar-Taj and behead its librarian. They steal a few pages from an ancient mystical text belonging to the Ancient One (Tilda Swinton), a long-lived sorcerer who has taught every student at Kamar-Taj, including Kaecilius, in the mystic arts. The Ancient One pursues the traitors across strange landscapes, but Kaecilius and his followers escape.

Present day New York City and Dr Stephen Strange (Cumberbatch), an acclaimed but arrogant neurosurgeon, severely injures his hands in a big accident, leaving him unable to do his job and falls into a deep depression. Fellow surgeon and former lover Christine Palmer (Rachael McAdams) tries to help him move on, but Strange vainly pursues experimental surgeries and healing techniques to fix his hands.

An ex patient of his, Jonathan Pangborn (Benjamin Bratt), provides hope. He was a paraplegic who Strange could not fix but has mysteriously regained full use of his legs and body and now playing basketball with work mates. When Pangborn takes sympathy on the arrogant doc when he sees his mangled hands he directs him to go to Kamar-Taj.

On arrival I Nepal, Strange is rescued from street robbers by a man called Mordo (Chiwetel Ejiofor), a sorcerer with zen like skills under the cloak of the Ancient One. The Ancient One eventually accepts him into their sanctum where he begins training in various ancient arts to try and recover like Pangbourne did, Master Wong (Benedict Wong) his teacher. 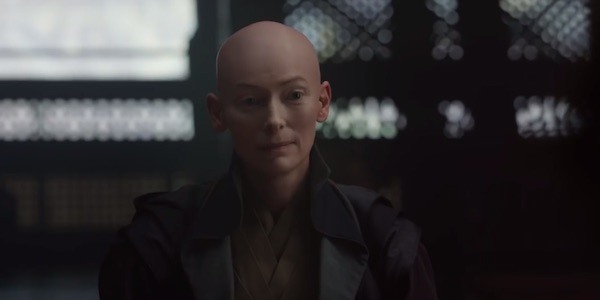 Strange learns fast under the Ancient One , and from ancient books in the sacred library that is guarded by Master Wong, Strange learns that Earth is protected from threats from other dimensions by a shield generated from three buildings called Sanctums, in New York City, London, and Hong Kong, which are all connected and accessible from Kamar-Taj. The sorcerers’ task is to protect the Sanctums. But when Strange starts practicing the dark arts he shouldn’t and beyond his pay grade, the text from which Kaecilius stole pages, he upsets the space-time conium somewhat and Kaecilius strikes.

Wasn’t sure about this one but ended up enjoying it. Not the greatest superhero film ever but not the worse. Cumberbatch is good in the lead and works in context and androgynous Tilda Swinton, always brill at everything she does. For those two to take on a comic book movie you know it’s not going to be a ‘kapow’ or silly two hours. Dr Strange character brings some humor to proceedings but it is all rather po-faced so don’t expect Deadpool or The Avengers.

The Inception style special effects are the highlight here as time and dimensions are warped to allow the characters to do their superhero ability and if that particular special effect was debuting I guess this film would have been even more popular. But it’s not and so you expect it and take it for granted and so why comic book films need more than just that these days to be entertainment.  Dr Strange is not strong on the other stuff although some good scripting to keep him grounded. Strange is not a likeable character though.

As I say its good fun and no real violence or swearing and so good for kids and upwards. It’s bold in vision but 70% green-screen so not one for big panoramic scenes of cities being trashed. Its best quality is that it’s not those movies and something different in the genre. I can see this one getting a bigger budget sequel one day soon.

The Star –‘It’s handicapped by performances that are decent but not great, an over-abundance of visual effects that are state-of-the-art but far too familiar, and a storyline that just gets sillier the longer it goes on’.

Times of India –‘Doctor Strange elevates yet another relatively unknown Marvel character to top tier status, making it well worth a dizzying watch

The New Republic –‘Doctor Strange is about as weird as any Marvel movie is going to get these days, which is not particularly weird’.

The Mail –‘Benedict Cumberbatch might not fit the leading man profile, but he wears the Doctor Strange uniform well’.

Globe & Mail –‘Doctor Strange, intended to be a mind-bending, rule-breaking rebuke to the squares of superhero cinema, turns out to be a rebel in name only — the textbook definition of a bad trip’.

Time Magazine –‘Cumberbatch, both a natural comedian and a subtle one, knows how to get a big laugh from nothing more than an arched eyebrow’.

Film Comment-‘Doctor Strange seems to represent the point at which the art of CGI and the discipline of imagining visual images spatially seems to have reached a sublime degree of 3D complexity’.