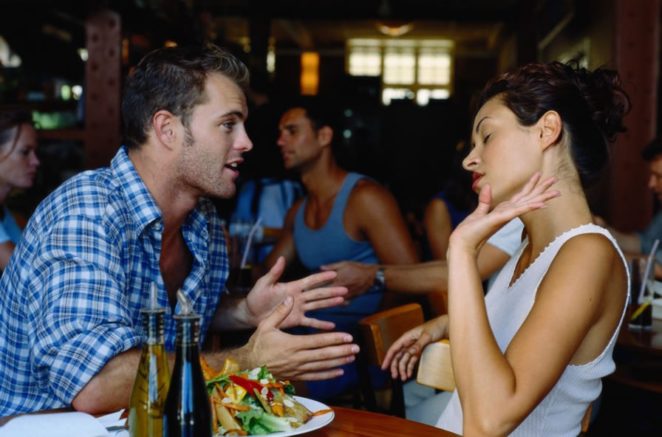 He seemed a charming gentleman. I quite liked him. We were working on a project together and were sharing coffee after a meeting.  Apropos of nothing  he began to disparage his wife.

As I sipped my coffee, I assumed he was working up to the opening lines of an invitation to an affair, the usual ‘my wife doesn’t understand me.’

As I knew my answer was no, I let him talk, enjoying the coffee.  He went on and on, and I decided it was time to go. He still had not gotten to what I assumed his purpose of such a spewing of venom.

I left the premises and on my way home pondered why he had spent so much time viciously bashing his wife.

There was another meeting, another coffee break, and  I was rather taken aback when he began his litany of his wife’s faults.

I forced the conversation to business and cut the meeting short, rather confused with his behaviour.

This was a man who spoke well, carried himself well, was able to enter the most rarefied atmosphere of the Upper Class without pause, yet, verbal dissection of his wife was all he would discuss.

He did not use it as a precursor to an affair, he just engaged in wife bashing for its own sake.

An acquaintance of mine, who knew of my business connection to him, made occasion to see me and asked about him. She was a stock broker, it seemed he was interested in investing, yet, the discussion was no more than a constant attack on his wife.

I realised that this man was one of those abusive husbands who gains his greatest joy in tearing down his wife behind her back.

Where other men would have sexual affairs, he was fulfilled with verbal vomit, for being orally unfaithful to his wife satisfied him.

His wife was a sweet woman. She deferred to him at all times, thinking he was such a paragon of virtue. Little did she know that her husband was as unfaithful to her as the man who is engaging in sex with the cheerleading squad.

Over time one appreciates that many men wear this persona of ‘charming gentleman’ and never do anything to damage it, but, deep down, they are abusers who suppress their physical violence with a verbal mutilation of the woman who loves them.