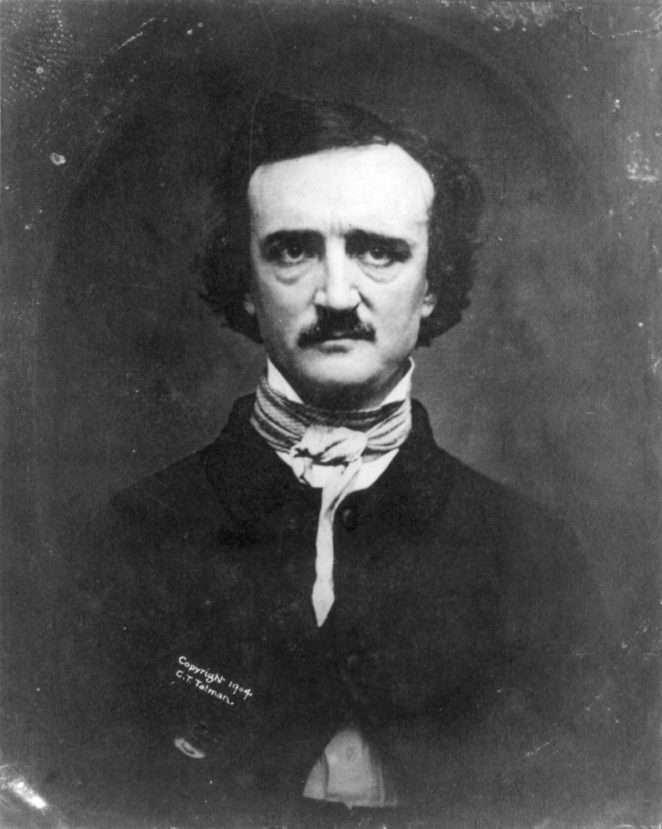 “Once upon a midnight dreary while I pondered weak and weary

Over many a faint and curious volume of forgotten lore;

While I pondered nearly napping…”

And that is how I’m feeling. I’m “nearly napping” trying to muster up a poem or some prose or even a prose-poem to do justice to the melancholy, depressing voice of Mr. Oh No Poe, the alcoholic drug-addict who loved his first cousin to bits. (And that really was to bits!) What to make of the creator of Roddy Usher who imprisoned live female relatvies in houses falling into dismal tarns? Well, it’s all here in his verses, his thronged angels with wings, veils, and most importantly tears, in his shadow-brow of zombie breath and revelation, and in his dirge-lurge for the “lovely dead” who “died so young”. And what on earth does that mean? “Lovely”, “dead”, “died”, and “so young”? Is that a lament over abortion or a 30-second babe or what?

Yes, you’ve got to hand it to rambling, fanatical Poe, he gets you and gets to you and gets up yours but he’s not the most intelligent of guys around and however sensational he was and however sorry you feel for his fate, you just have to say with Jane Austen “undesirable” although that lady said: “The impossibility of avoiding undesirable people”. I say to Miss Austen he’s one I’ve managed to avoid but only because time is on my side…but is time on my side and have i really avoided him? To end with that beginning:

“Once  upon a midnight dreary…”