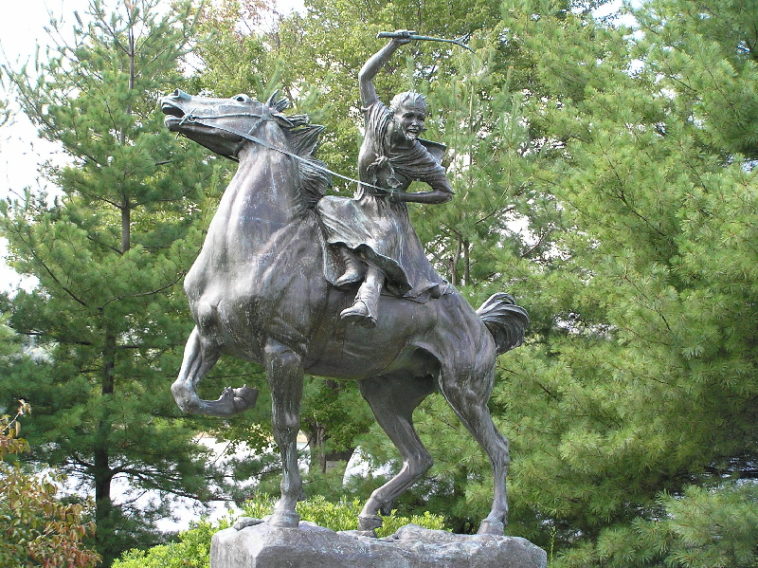 A statue of Sybil Ludington which can be found on Gleneida Avenue in Carmel, New York. It was done by Anna Hyatt Huntington.

Everyone has heard of the midnight ride of Paul Revere. Of course he had great PR in the form of a poem written in 1861 by Henry Wadsworth Longfellow. However, most people do not know that about two years after Paul Revere made his ride, his feat was duplicated, in fact, surpassed, by 16-year-old Sybil Luddington. About 9:00 PM on 26 April 1777, Sybil got on her horse and rode through the countryside to warn the colonialists of an impending British attack. At forty miles, her ride was more than twice as long as Revere’s.

The British were attacking Danbury, Connecticut. Sybil, daughter of Colonel Henry Ludington of the 7th Regiment of the Dutchess County Militia, rode from her home in what is now called Kent, New York through Carmel to Mahopac, then on to Kent Cliffs, and from there to Farmers Mills before returning back home. Along the way she knocked on doors to alert the people. During the ride she had to use a long stick to defend herself against a highwayman.

When she returned home at dawn, rain-soaked, most of her father’s 400 man militia had assembled. Although they were too late to defend Danbury, they were able to drive British General and governor of the New York colony, back to the Long Island Sound.

In 1784 Sybil married Edmond Ogden, a farmer and innkeeper (some sources say he was a lawyer). They had one child whom they named Henry and lived in Unadill, New York. She died there on 26 February 1839 at the age of 77 and is buried in Patterson Presbyterian Cemetery in Patterson, New York. Her grave site is near her father’s.

In 1935 New York State commemorated her ride by placing markers along the route. In 1961 a statue of her by Anna Hyatt Huntington was erected near Carmel, New York. Since 1979 a 50 kilometer race is held along the route each April.

Interestingly, there is some confusion over the spelling of her first name. Although Sybil is the most common spelling, her tombstone reads ‘Sibbell’. Her sister spelled in ‘Sebil’. She is listed as ‘Sibel’ in the 1810 census and other records as ‘Cybil’. This is not atypical of records of the time.