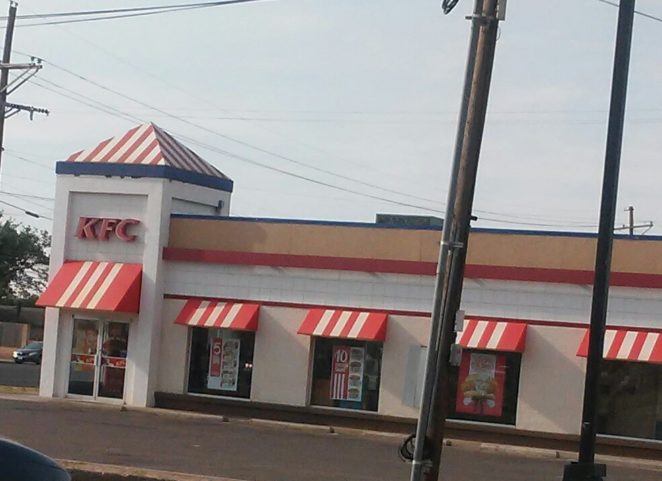 I had stopped in at my favorite KFC earlier (for those who don’t know, that stands for Kentucky Fried Chicken, a very popular restaurant chain here in the US) for a quick meal and a few more minutes of charging up my phone.

All was going fine. The food was delicious and everyone was enjoying themselves, including a mother and her four (or five I can’t remember) young teenage daughters. The oldest might have been 14.

They were making everyone smile with the oldest kid singing along with the Muzak system. She was funny and actually had a very nice singing voice and, although her singing made it harder for me to listen to my own music, I did not mind. The child was having fun with her family.

The mom suddenly mentioned something to a loner type who had been staring at her daughters so that she was uncomfortable and, being a good momma bear, she spoke up.

In true deflection style, he responded by standing up and loudly yelling slurs and cuss words at her and bordering on blatant threats. The children were visibly scared.

“Well, this is unacceptable,” I thought to myself, so I stood up, already calculating what steps and movements I needed to make to kick this man in his chest for being agressive to the lady and her children.

I mean, just who did he think he was? Right?

I was ready, willing and able to give him a free, hands-and-feet-and-teeth-and-screaming-berserker-on-lesson in respect.

But as luck would have it, he was the kind of “man” who could be threatening to women and children but when another guy steps in, he turned and ran.

As well, it turns out, I was only a second or two ahead of the response from everyone else in the place. He was loud and stupid enough to get the attention of everyone in the place – men and women alike.

The whole crew was already coming out of the kitchen by the time he ran and a crew of three big men working on a tree-trimming crew were eye-balling him, as well.

This guy was in more trouble than he’d ever seen in his life and he knew it.

As soon as he went outside, I went out, too, just to make sure Mr. McCreepy wasn’t lingering with any ideas of continuing his harassment. He was already gone and out-of-sight.

When the family came out, the mom kept telling me “Thank you” and I assured her it would’ve been a privilege. The crew of tree-trimmers were also there, escorting the family like Palladine warriors.

Big guys. They were truly impressive.

This family was perfectly safe and sound and I believe they knew it.

I am not telling this story to brag or any such thing. I tell it to remind anyone and everyone of the saying “All it takes for evil to flourish is for good men to do nothing.”

We can watch out for others. And, while we might not be expressly obligated to help strangers, when we can, I believe we should.

At the very least, it’s an excellent natural high – the rush of adrenaline prior to getting physical.

And, the people of this restaurant now also know, this homeless guy gives a damn and this family knows people do care.