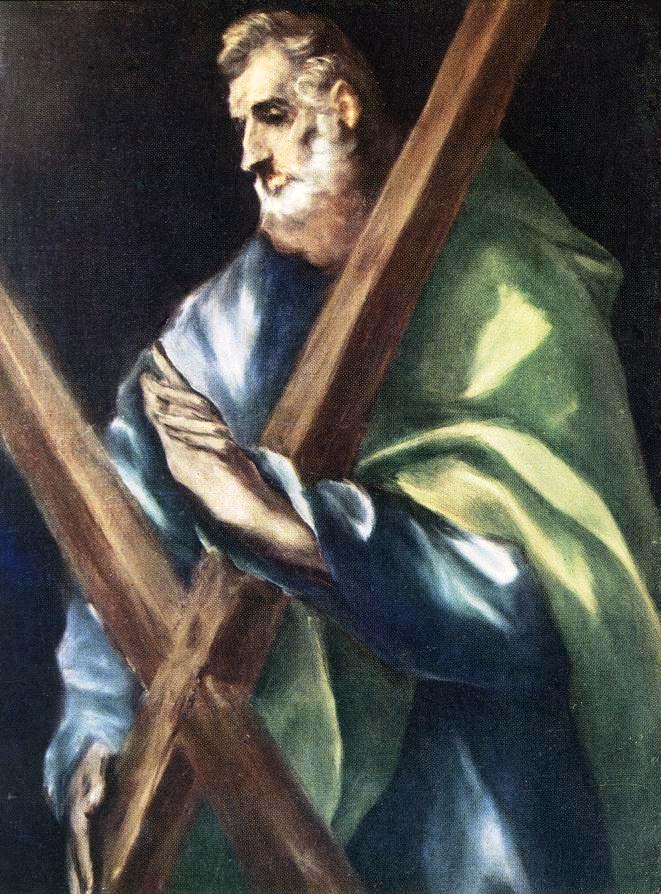 Portrayal in Art: He is symbolized by a fish or a fishing net. He is often depicted as a man bound to a cross, often preaching from the cross or a preacher holding some fish.

Andrew was the brother of fellow-apostle Peter (Simon bar-Jonah). Since he is usually mentioned after Peter, he was probably the younger of the two. Along with their partners James and John, the brothers made their living as fishermen.

Andrew’s name is of Greek origin, not Aramaic or Hebrew as you might expect. In Greek it is Andreas and comes from the Greek word for man (aner, or in the genitive, andros). Pope Benedict XVI suggests that this might be a reflection of the Greek influence in Galilee [General Audience, 14 Jun 2006].

Even though Andrew followed Jesus before Peter did,  he was one of the followers of John the Baptist who left John to follow Jesus (John 1:40), he did not have the same level of closeness that Peter, James and John enjoyed. Andrew is sometimes referred to as the Protoklete, the first called.

In the gospels it is Andrew who tells Jesus the young boy with the loaves and fishes which Jesus later multiplied to feed the crowd (John 6:8-9). It is Andrew who, when Jesus comments about the destruction of the temple, asks Him when it will occur and when will He establish His kingdom (Mark 13:1-4). When some Greeks come to talk to Jesus, it is Andrew who introduces them (John 12:20-22).

Origen, quoted in Eusebius’ Ecclesiastical History, says that Andrew went to preach in Scythia. The Chronicle of Nestor (written in Old Church Slavonic around 1113) adds that he also preached around the Black Sea and the Dnieper River as far as Kiev. Hippolytus of Rome (170-235 AD) says that Andrew preached in Thrace. The 2nd century apocryphal Acts of Andrew, which dates back to the mid-2nd century AD, puts him in Byzantium. Basil of Seleucia also mentions Andrew’s mission in Thrace, as well as Scythia and Achaia.

Andrew was crucified on an X-shaped cross in Patras, Greece. The X-shaped cross is known as St. Andrew’s Cross because of this. According to The Passion of Andrew (early 6th century) he is reported to have said:

“Hail, O Cross, inaugurated by the Body of Christ and adorned with his limbs as though they were precious pearls. Before the Lord mounted you, you inspired an earthly fear. Now, instead, endowed with heavenly love, you are accepted as a gift.”Believers know of the great joy that you possess, and of the multitude of gifts you have prepared. I come to you, therefore, confident and joyful, so that you too may receive me exultant as a disciple of the One who was hung upon you…. O blessed Cross, clothed in the majesty and beauty of the Lord’s limbs!… Take me, carry me far from men, and restore me to my Teacher, so that, through you, the one who redeemed me by you, may receive me. Hail, O Cross; yes, hail indeed!”.

Andrew’s relics were moved from Patras to Constantinople where they remained until 1204 when some of the western Crusaders stole them and brought them to the Cathedral at Amalfi, Italy (near Naples). In September 1964, Pope Paul VI ordered that all of the relics of Andrew which were in the Vatican be returned to Patras as an act of good will.