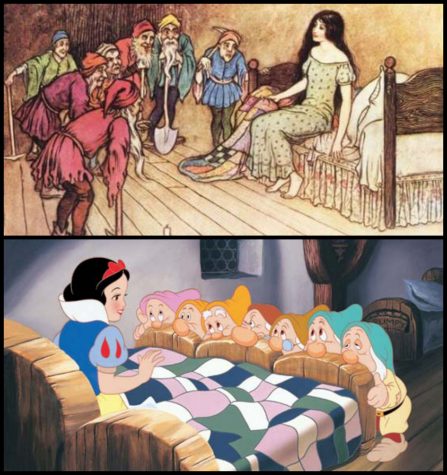 Disney is his first animated film used a story about a girl “White as snow, red as blood, black as ebony.” For starting the idea took the German Brothers Grimm fairy tale from the 19th century. Although in the upcoming Disney movies rather deviate from the original story, with Snezana this was not the case. Volt is kept too egotistical character queen, magic mirror, a hunter who did not have the heart to obey orders of Queen and kills young SNEŽA, a team of dwarfs and a poisoned apple.

However, the epilogue to the original stories and cartoons are different. After they had seen only once, and sang two minutes, the young prince fell in love with SNEŽA, and when he found her lying in a glass coffin, kissed her, thereby resetting the fact poisonous apple. The story of the Brothers Grimm says that the prince, after he was found dead, asked her friends the dwarves to carry her coffin to his palace and kept  is like a work of art. While the prince’s servants carried the coffin to the castle, one of them tripped, shook suitcase and a piece of poisoned apple fell out of Snežinog throat. The prince proposed to Snow White and organized lavish wedding.